This overview of athletics in Kent was included in the 'Victoria History of the County of Kent', edited by William Page (1908). This section was written by Frank Bonnett. At that time, much of what is now South East London - where I live - would have been regarded as Kent. Hence this summary includes mentions of the still very active South London running clubs, Herne Hill Harriers, Cambridge Harriers, Blackheath Harriers  (now Blackheath & Bromley Harriers) and Kent Athletic Club (my club - actually  Lewisham-based, rather than being a 'Kent county' club). The latter evidently  'won the last of the South-of-the-Thames races (1907) with a team of young and promising stayers', and are still running in the same competition more than a hundred years later. 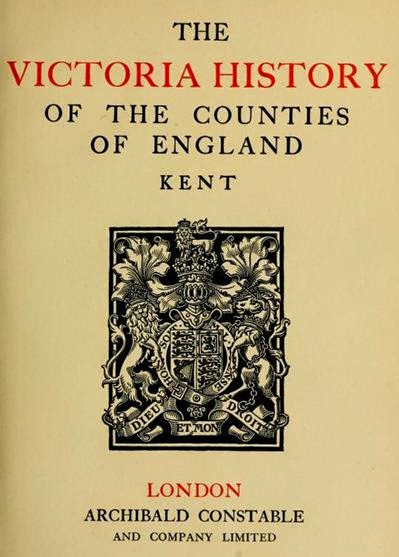 'The historian who sets himself the task of recording the story of Kent athletics finds at once that he has to deal with a county possessing peculiarities of its own with regard to this branch of sport; indeed, in one particular respect, Kent stands almost, if not quite, in a class by itself. Other counties have their amateur and their professional side of athletics, but in Kent the latter feature predominates to a much greater extent than can be found, probably, in any other part of the kingdom. Athletic sports, promoted under the laws and regulations of  the Amateur Athletic Association (AAA), are comparatively few and far between, whereas meetings of the unregistered type are numerous in almost every part of the county.

The athlete who indulges in sport for sport's sake, which, as all must admit, is the healthiest form of recreation for mind and body that can be devised, would expect to find that in this part of England as elsewhere amateur gatherings held under the auspices of the A.A.A. were on the increase; but such unfortunately is not the case. It is to be noticed, indeed, that a number of meetings which were once of the unregistered type, and whose promoters tried the experiment of holding their sports under the aegis of the 'Three A's'  found the cost of the undertaking, including the payment of permit fees and the employment of official handicappers, far greater than they could bear, and they have long since reverted to the old order of things.

The tendency to follow this example still exists. It seems likely that in the near future many more clubs will adopt the unregistered principle, while there appears to be little likelihood of new clubs coming forward to fill the gaps caused by these secessions from the ranks of pure amateurism. One cannot but regret this state of affairs, for strictly amateur athletics should everywhere form a part of the curriculum of the youth of England.

Other meetings of the long ago in the county of Kent, though still promoted under the laws of the Amateur Athletic Association, have either become less exclusive as regards the rules which govern them, or have gradually drifted into the hands of men with good ideas of sport but possessed of broader minds on the subject of amateurism and  more democratic in their views. Belonging to this latter class of sports are those held at Belvedere, which meeting may be regarded as the successor to the old Erith and Belvedere fixture. No more popular gathering than this last within easy reach of London ever existed. In its palmy days in the early 'eighties it was loyally supported by the members of the London Athletic Club and similar bodies ; but the character of the meeting has changed considerably since then, although it is still popular...

Real athletics never flourished to any considerable extent in Kent, albeit as the county in which some important cycling contests have been decided under the auspices of the National Cyclists' Union, it has been rather famous in the past. To find anything of downright historical interest in Kentish field sports, apart from the fact that good men from other districts came to the county meetings, one has to come to the very modern times of 1887 to note that a Lewisham resident (but a Birmingham born man), J. H. Adams, carried off the 50 miles Ordinary Bicycle Championship of the N.C.U. at Birmingham. F. J. Osmond, S. F. Edge, and P. F. Wood, old cycle and tricycle champions, had their Kentish club and residential connexions, and the Crystal Palace itself has long been a home of cycle-racing. In 1892 the Heme Hill track was chosen for the N.C.U.'s chief races, and the Catford ground was used in 1896. A winner of a N.C.U. medal for the tandem championship in 1898 was F. Burnand of Catford, who partnered E. J. Callingham, a Surrey resident.

The Blackheath Harriers and Heme Hill Harriers are chiefly Kentish men, and while the former is rather an exclusive society, the latter can be said to have turned out some very useful runners within the past
decade. For instance the 15 miles amateur record holder, Fred J. Appleby, is a member of the H.H.H., and the ex-Irish mile and four miles champion, J. N. Deakin, bears the ' hoops ' of that club, as does F. H. Hulford, who has won the 4 miles A.A.A. championship. The quarter-mile champion of England in 1903, Chas. McLachlan, wore the colours of  the Heme Hill contingent, which is so well looked after by Mr. Chas. Otway (Camberwell), their honorary secretary. The Blackheath Harriers have boasted a capital half-miler in B. J. Blunden, who has held English honours at that distance, and A. Healey, a fellow member, who ran second in the hurdle race at Athens, has won several Northern Counties championships by reason of his birth qualification.

Another club, the Kent A.C., brought into prominence A. Aldridge, a stayer who won Southern, National, and International honours on the flat and across country, though he always had to play second fiddle, when they met, to the Sussex wonder, Alfred Shrubb.  In the South-of-the-Thames Cross-Country championships Kentish clubs always figure  prominently, and they won the last of the South-of-the-Thames races (1907) with a team of young and promising stayers.

Another club, the Cambridge Harriers, which to all intents and purposes is a London institution, belies its name so far as its membership is concerned, for most of its members are drawn from the county of Kent. The club was established in 1890.

Other athletic clubs within the county which hold their meetings under the laws of the Amateur Athletic Association are the Erith Harriers ; Swanley C.M. and A.C.; Cray Valley C.M. and A.C ; Sittingbourne C.C; Dover CC ; Bexley W.M.C ; and Foots Cray C.C.

In addition to the sports meetings promoted by these clubs, numerous gatherings are held annually, or at irregular intervals, in various parts of the county. Some are unregistered meetings mainly supported by amateur athletes, while others are avowedly of the professional order. Between these two kinds of meetings there is in reality a far greater difference than is recognized by the ruling body of the sport. But that Association tars both with the same brush and looks upon the unregistered meeting as disdainfully as it considers the purely professional undertaking. A hard and fast line must, however, be drawn somewhere, and severe as the regulations of the A.A.A. may appear to be in some instances, there is no doubt that their action is entirely in accordance with the best interests of those amateurs who are loyal to the provisions made by the laws of the predominant body.

Canterbury, Gravesend A.C, Northfleet Institute, Cliffe-at-Hoo, Rainham, Ramsgate, Birchington-on-Sea, Maidstone, Kent County Constabulary, Ashford United, Smeeth, Charing, Headcorn, High Halden, Chatham, Sittingbourne, Bexley Heath, and Orpington all hold sports every year - some of them in connexion with local flower shows - but it is impossible to say which of these are registered, unregistered or professional meetings, even if it were advisable to state the fact.

For a long time past, and indeed through-out the whole of its athletic career, although perhaps never more so than at the present time, Kent has been an unsettled county in the matter of its athletic principles, and the meeting that is registered to-day is more than likely to be unregistered, or even admittedly professional, tomorrow'.

I was  interested in the discussion of amateurism (covered here previously). A lot of athletics history gives the impression that at this time, running was either 'amateur' or 'professional', whereas it seems there was a big grey area in between of  'unregistered' athletics involving people who perhaps just didn't want the cost and hassle of complying with AAA regulations.
Posted by Neil Gordon-Orr at 19:45