I volunteered this morning at a test run for the launch next week of Hilly Fields junior parkrun. The idea was for a group of children to try out the course and for the marshals to test the systems. It all went fine which means that the first Hilly Fields junior parkrun proper will take place next Sunday 10th May at 9:30 am, and every Sunday thereafter. All welcome and no charge, though you should register as a one off before starting - full details here.

Since it started in Bushy Park in 2004, parkrun has grown to be a massive international phenomenon. In the UK alone there are now 320 free, timed 5k runs taking place every Saturday morning. A couple of weeks ago (April 18th) a record 68,838 people took part in parkun events in the UK,and that doesn't include the thousands of volunteers who put on the events.

Many children and young people take part, but there is a limit to children's participation in the 5k events. For some 5000m  is too daunting a distance, and most importantly children under the age of eleven must be accompanied throughout the run by a parent, guardian or appropriate adult of the parent's choice. This is a very sensible rule, but it does mean that if younger children don't have a parent/carer who is also running they can't take part.

This is where Junior parkrun comes in - over the last couple of years, parkrun has been developing a series of events specifically for children and young people aged 4 to 14. The runs are for 2k rather than 5k and a higher concentration of volunteers - with every child visible at all times to at least two volunteers - means that it is safe for children to run unaccompanied by adults (and run directors are subject to all the usual safeguarding checks).

There are now 43 junior parkruns in the UK, with more in the planning stage (for a full list see here) . In London there are currently ten:

The next generation of runners

The development of Junior parkrun is being spearheaded by Chrissie Wellington, four times World Ironman champion and author of 'A Life Without Limits' (great book - I've just read it). She has explained: 'the dream was to provide an opportunity for children across the UK to participate in free physical activity, on a regular basis. We wanted to give them the chance to experience open space, to enjoy the natural environment, to be with their friends and make new ones, to challenge themselves, to keep fit, to laugh, to smile and to have fun'. Who knows, getting larger numbers of children in the habit of taking part in organised running might also throw up some of the great runners of the future.

Junior runners are awarded coloured wristbands according to  how far they have run - a blue wristband for a cumulative ‘Half Marathon’ (11 junior parkruns), a green 'Marathon' band for 42 cumulative kilometers (21 parkruns) and an orange 'Ultra' band for those who have clocked up 100km (50 runs). 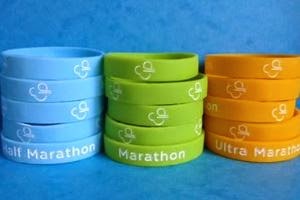 Not quite so Hilly Fields

Hilly Fields, in the London Borough of Lewisham, has a well established parkrun on Saturday mornings. It has grown steadily since starting in September 2012 and now regularly attracts well over 100 runners. The junior parkrun on Sundays will cover some of the same course but will be two laps instead of three, and will avoid the big hill beloved of Saturday runners. It starts and finishes by Pistachios, the cafe in the park. 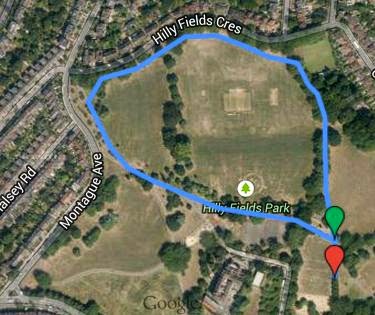 Update (10 May): the first Junior parkrun at Hilly Fields today was a great success, with an incredible 119 children and young people taking part - including a contingent of over 40 who came up together from John Stainer Primary School. Oliver Bright (Kent AC) set the boys' course record in 7m 19s, Amelia Middleton did the same for the girls in 8m 42s, but there were great performances from everyone. Race report and results here, photos at flickr (from where the following two were sourced).