Running on Screen (7): Run Lola Run and running as space-timecompression in Berlin

Some inspiration for anyone preparing for next month's Berlin Marathon:

'Not since the heyday of that infernal beeping roadrunner has a character spent as much time running across a cinema screen as Lola' (The Lolaness of the Long Distance Runner, Guardian, 1999) 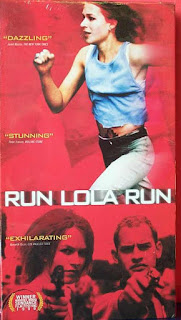 'After walking, running is the first technology of the body that, through human agency, seeks to compress time and space...seeks to bring together in time two discrete points in space, overcoming the constraint on interaction caused by distance. I run to close the distance between myself and the train waiting to pull away from the platform; I run rather than walk from potential threats, hoping to place distance between the threats and myself.  Running as a means of time-space compression is breathtakingly illustrated in the stunning German movie Lola Rennt (Run Lola Run), written and directed by Tom Tykwer in 1998. In it, Lola has 20 minutes to reach her boyfriend or he will be killed. Given no other means of transport, she has to run as fast as she can given the time available to her. It is an example of space being (or attempted to be) devoured by time' (John Bale, Running Cultures: Racing in Time and Space, London: Routledge, 2004, p.1).

'Run Lola Run depicts its setting, Berlin, as a cyberspace obstacle course or environment usually associated with interactive video and computer games. The eerie emptiness of the Berlin of Run Lola Run... is necessary to keep the protagonist Lola moving at high speed from the West to the East part of town and back again - another fantasy which is only possible when the city is recast as a virtual environment. In Run Lola Run Berlin is represented as an idealised space of bodily and psychic mobility where the instantaneous technology of cyberspace is physically realised as a utopia of speed...

While Run Lola Run does not explicitly indicate that the space of action is Berlin, viewers are clear of the setting: a repeated establishing shot of the Friedrichstrasse U-Bahn stop, a central commuting street near the Brandenburg Gate in the former East Berlin which has undergone extensive reconstruction since 1990, begins each episode of the film... Berlin is also made explicit as Tykwer often stages scenes at clearly-marked street intersections which identify particular locations or boroughs thoughout east and west Berlin. The viewer notes that Lola escapes her father's bank during one episode and faces Unter den Linden; several scenes unfold on the banks of the river Spree; Lola sprints between the Altes Museum and the Berlin Cathedral' (Claudia Mesch, Racing Berlin: The Games of Run Lola Run, M/C: A Journal of Media and Culture 3.3,2000). 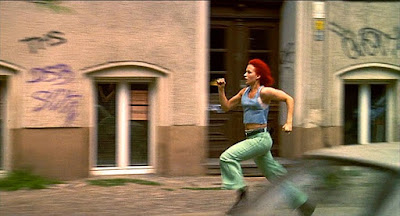 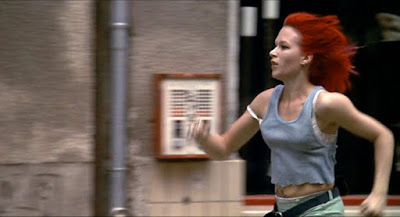 Walford Half Marathon (Eastenders)
Race Strategy in The (US) Office
Top of the Lake and The FallThe Running Man (1987)Muybridge's Runner, 1887
The Casual Vacancy