It's common now for major running events like the London Marathon and the various 'Great....' runs to highlight the participation of  Celebrity runners and the Great North Run last Sunday was no exception.  The official list only mentioned one musician that I could see - the Kaiser Chiefs keyboardist Nick 'Peanut' Baines ran a very respectable 1:34.

I would like to mention though a couple of runners too cool to be celebrities but with musical kudos and, as it happens, both part of the North East diaspora in London with a connection to my New Cross neighbourhood.

Johny Brown hails from Newcastle area, but it was in New Cross in the 1980s that he and friends started the great Band of Holy Joy. They released a series of albums in that period including 'More Tales of the City' and 'Manic, Magic, Majestic' (the latter on Rough Trade) before splitting up, but have reformed more recently and are still producing some really good material. I last saw them in the Montague Arms in New Cross a couple of years ago and I thought they were at least as strong as when I saw them at the Town and Country Club and other places back in the day. They are also responsible for the Resonance FM Bad Punk show.

Anyway lead singer Johny Brown ran the Great North Run for Mencap. He says: 'It was a great day and the run was immense, two hours and twenty minutes was my time, though I never got going due to the sheer mass of people. Wow, what an atmosphere, on a glorious Indian Summer afternoon. The hardest bit was the wait for the ferry and the best bit was the two pints of lager in the Wooden Dolly when we hit the Northern Bank of the river'. Still time to sponsor him retrospectively here. 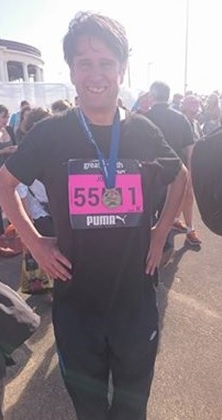 Emma Jackson is  now a Sociologist at Goldsmiths in New Cross, and the author of a book on 'Young Homeless People and Urban Space' among other interesting work. In her former incarnation as Emmy-Kate  Montrose she was bass guitarist for legendary Sunderland Britpop/punk band Kenickie. Her latest research project, 'The Choreography of Everyday Multiculture: Bowling together?' sounds right up my street, looking at  a'seemingly ordinary place, a bowling alley, used by a diverse population in terms of age, class and ethnicity and standing on a busy crossroads in a fast changing neighbourhood at the intersection of three London boroughs'. Last time I went bowling upstairs at the Elephant and Castle shopping centre ('The London Palace Superbowl'), I thought somebody should write about this place before it disappears, all life is here. Now it seems somebody is, or at least about somewhere similar. Here's Emma at the end of the Great North Run last week:

Incidentally Emma's sometime bandmate Lauren Laverne wrote an interesting piece earlier this year on 'Why women need to start calling themselves sporty' which talked about how for 15 years running was 'the bedrock of my health and sanity. Joyful, exhausting, exhilarating, essential. I never once actually wanted to go, of course. You never do. But, every time, I came back glad I did. I ran from confusion to clarity, to a new career, London, into motherhood. I had to stop during both my pregnancies and, at night, I dreamt about it'. More recently she 'decided to start running again because it shouldn’t be the preserve of those who are already good at it. Sport does not belong to fit people any more than karaoke belongs to those who can actually sing'

Some other musicians in motion...

Northern Soul and Running as the New Raving