Lisbon is a great city for a holiday - good food, drink, largely unspoilt old buildings and streets in the centre, great art galleries and museums, and beaches within easy reach by cheap public transport. But what's it like to run in?

Well like all hot places in the summer, it's best to run early in the morning. I found that by 7:30 am in August it was already getting uncomfortably hot to run,  but in any case in a busy tourist destination you need to be out early to avoid the crowds and traffic. As in most cities, early on the only people on the streets are runners and clubbers from the night before.

The other factor is that, like Rome, Lisbon is a city built on seven hills. As I will explain, there are some flatter runs possible, but not too many.

Lisbon sits on the River Tagus where it runs into the Atlantic so the most straightforward flat route is to run along the river. I started out on my first day at the riverfront in front of Praça do Comércio (a main square in the centre) and just turned right and headed west. You can stay on the riverbank for large parts of the run, in places there are docks and other fenced off places that push you away from the river, but it's easy enough to follow paths parallel to the river until you can rejoin it. If you're worried about getting lost, just wait until another runner comes along and follow them - there's a steady stream in the morning.

I ran for about three miles to the Ponte 25 de Abril (25 April bridge), a Golden Gate style suspension bridge which crosses the river  - it takes its current name from the revolt of 25 April 1974 that ended more than 40 years of fascist-style dictatorship. And no you can't run across it, it's strictly for vehicles except during the annual Lisbon Half Marathon where it forms part of the course.

Other runners take the train from Cais do Sodre train station to Belem a bit further along the river (where many of the museums/galleries are) from where you can run out beyond the city and along the coast out to the beaches to the west. 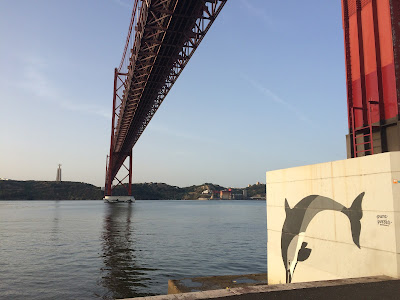 Not so flat, but not too much of an incline is the Avenida da Liberdade (Liberty Avenue), a tree lined and therefore relatively shady boulevard heading north west from Rossio square. This is a good run of over 1 km before you reach a park, Parque Eduardo VII. As with many of Lisbon's streets you are running on tiles or cobbles which are not always as even as they appear - so lift those knees up!


In the park on the east side (the right side if you are coming up from city centre) is the Carlos Lopes pavillion, a  1920s building renamed in honour of the Portuguese winner of the 1984 Los Angeles Olympics Marathon in 2:09:21. Apparently there is a small permanent exhibition inside including his running shoes from 1984, but unfortunately  the building was closed when I visited. ﻿


Getting to the highest point in Lisbon up by the castle does mean some serious step climbing - once again best earlier not just because of the heat but because heading up through the old town Alfama district means negotiating narrow streets which can get quite crowded, not to mention dodging trams. Easy to get lost but if you come up from the river front as long as you are going uphill you are going in approximately the right direction. Don't stress about losing your GPS signal amidst the alleyways, that's goes with the territory. 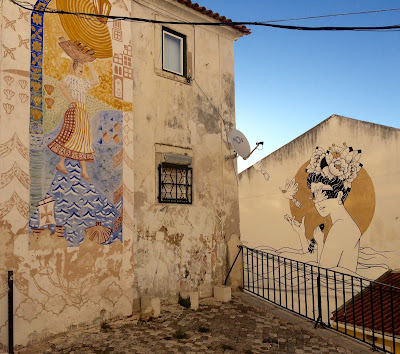 The Baixa district consists of a grid of parallel streets that is similar to London's West End, with lots of globally familiar high street shops. These are a godsend to runners before they get busy, fairly flat, some pedestrianised and with the buildings casting some shade. One morning I just ran up and down the grid.


As I mentioned before you can get the train - for a mere 5 Euros or so return - out the to the various beaches to the west of Lisbon. In most cases the train stops right next to the beach. We went to Estoril a couple of times, where I had a run along the front followed by swim in the sea.

Another great thing about Lisbon is that having burnt off some calories running you can treat yourself to some of the finest pastries. Of course you can get a Pastel de nata (Portuguese custard tart) in many British cafes now. But can you buy them from places where you can choose just how burnt you want the top?! 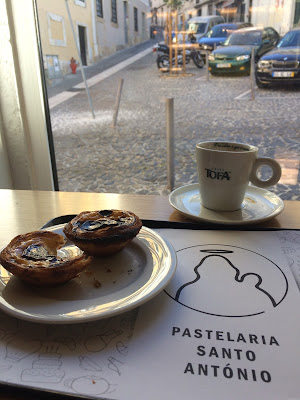 Conclusion - go to Lisbon, and pack your running shoes. 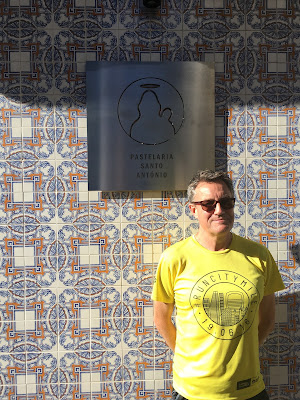 Some of my Lisbon runs on Strava -