Nature is your guide - pathfinding without GPS

'Nature is your guide: how to find your way on land and sea by observing nature' by Harold Gatty (1903-1957) was first published in 1958, and was later republished as 'Finding your way without map or compass'.

Tasmania-born Gatty was an experienced navigator himself, flying around the world with Wiley Post in a record-breaking eight days in 1931 and in the Second World War writing the US military's 'Raft Book' with survival tips for those adrift at sea in life rafts. 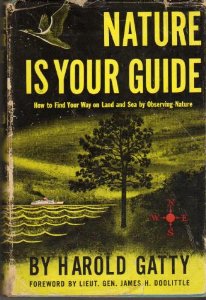 'Nature is your guide' expanded on the Raft Book to provide a fascinating compendium of ways in which people can find their way not just by observation of the sun, moon and stars but by paying attention to other natural phenomena such as birds, weather, trees and the patterns of snow fields and sand dunes. Among the many other 'Methods of pathfinding' he mentions include 'the study of reflections in the sky,… The direction of the prevailing wind, the observation of wind polished rocks and of the movements of high clouds, the directions of sun and shadows'.

Did you know that termite mounds in the desert areas of Australia are almost always oriented north-south? Probably more useful in the UK, many trees 'develop more foliage on the side which receives most sunlight', so in the northern hemisphere 'oak and beech trees in exposed positions are more heavily branched and have greater foliage on the south side'.

Sailors, nomads and other travellers have used these methods for thousands of years, but these skills have largely died out because with modern navigational aids they have become obsolete. I have a compass now on my phone, not to mention GPS mapping - but what would we do if  left to our own devices? (or rather left without our devices).

There is some archaic language in this book about 'primitive' people, but the author's point is that their skills in pathfinding were not due to biological differences such as possession of a mysterious 'sixth sense' of direction but to their acute observations of the natural world and their development of 'mental maps'.

For runners much of this pathfinding lore would probably only be useful on long unmarked trails in remote areas, though being able to know what direction you are heading in without GPS or compass could be a lifesaver in some situations.

In non-threatening circumstances I was pleased recenlty to be able to find my way lost in the woods by observing the direction of a stream, other than that the only use I have made of this knowledge is to run the shortest distance between two points.

As Gatty notes, moving in a straight line is not as easy as it seems and people who are lost often end up walking in circles - 'in walking almost every person tends to veer in one direction or another in a consistent way... this error is due in most cases to the difference in length of any individual's two legs'. In trail blazing,  'The traveller must pick out distant landmarks and work to them or by them. It is elementary practice to find two landmarks ahead and line them up, and to do the same thing looking back. Back marks are just as important as, if not more important than, fore marks' for finding your way home.

I have got into the mental habit now when I am racing of looking ahead to the most distant point on the course in a straight line ahead and then finding another nearer point which lines up with it - such as a divot or a bush  - and then heading towards that. Of course I only use points that are actually on the course - no sneaky short cuts for me! 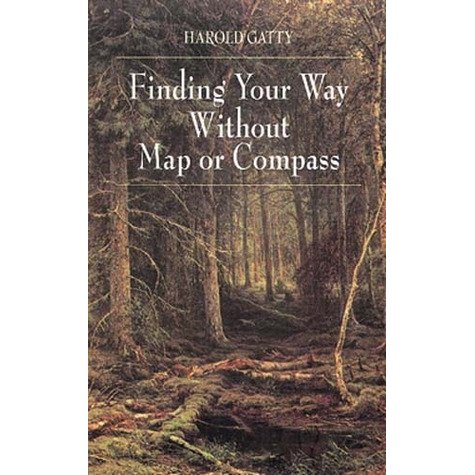