The View from a Hill - getting lost in the Sierra Cabrera 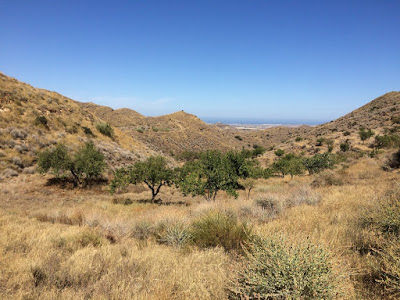 I recently had a family holiday in the semi-desert landscape of Almeria in Spain - an area where many classic 'western' films were made, such as Sergio Leone's 'The Good, the Bad and the Ugly' and 'Once upon a time in the West'. We stayed in Los Matreros, a tiny village on the edge of the Sierra Cabrera mountains, with lots of great running trails if you don't mind hills... and more hills stretching in all directions. 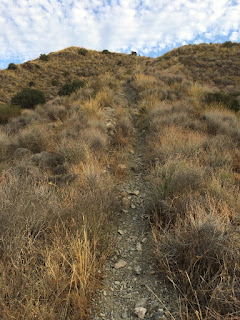 The best feature of where we were staying was a swimming pool where we all spent lots of time. In the evening swallows would dive around it - one flew in to the house and got trapped there (eventually it got tired and I was able to gently cover it in a sheet then released it outside).

The pool was oriented towards a striking hill on the other side of a dried up river valley so I was determined to run up it. It seemed easy enough, I could see that there was a track that wound around and up the lower part of it at least. 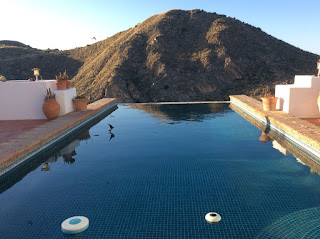 So I set off one morning, following the track as it headed behind the hill and then clambering up towards the top - my legs getting scratched by bushes as I did so. Of course I wanted to look back at where we were staying and I could see the small village of white buildings nestled into the hills opposite. But I could not see our house at all and it should have been easy to spot as it was next to the only high trees in the village. There was no sign of the trees or the house.

After a while I concluded that I must have been looking at a different village altogether but I couldn't work out how it could be in apparently the same place. If I was standing on top of this hill surely I must be able to see the house as from the house there was such a clear view of the hill. I had a spooky sensation that brought to mind M R James' classic ghost story 'A View from a Hill' (1925). 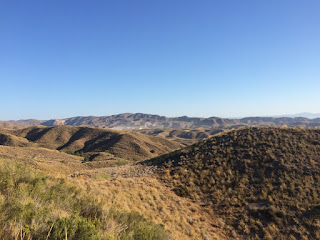 James sets up the story by making it clear that a traveller is heading into unknown (to him) and sparsely populated territory: 'How pleasant it can be, alone in a first-class railway carriage, on the first day of a holiday that is to be fairly long, to dawdle through a bit of English country that is unfamiliar, stopping at every station. You have a map open on your knee, and you pick out the villages that lie to right and left by their church towers. You marvel at the complete stillness that attends your stoppage at the stations, broken only by a footstep crunching the gravel...He was in the depths of the country. I need not particularise further than to say that if you divided the map of England into four quarters, he would have been found in the south-western of them'

Stopping at his destination, the local Squire accompanies him on a walk - 'it was hot, climbing a slippery grass slope that evening.... A small clump of old Scotch firs crowned the top of the hill; and, at the edge of it, commanding the cream of the view, was a wide and solid seat, on which the two disposed themselves, and wiped their brows, and regained breath. ‘Now, then,’ said the Squire, as soon as he was in a condition to talk connectedly, ‘this is where your glasses come in. But you’d better take a general look round first. My word! I’ve never seen the view look better.’

Looking through the binoculars that he has been lent, the protagonist spots buildings in the distance that he cannot see with the naked eye and which his companion cannot see either. There is a gallows and a large church. The explanation in this case is that the binoculars have been manufactured with some act of sorcery that enables people using them to see what was there in the past.

In my case the explanation was more prosaic - it dawned on me that I must in fact be on a different hill to the one I thought I was on. I ran down and up the similar shaped adjacent hill and yes there was our village and house, with my son waving at me from by the pool.

It was a reminder to me of just how quickly and easily you can become lost and disorientated in hills. You take a wrong path, imagine you are somewhere when in fact you are somewhere else, and if you continue you could find yourself in trouble in some circumstances.   When I hear about people doing solo running feats in hills and mountains  I am impressed by the endurance of endless ascent and descent but most of all I am impressed by how people can navigate in such landscapes, often in dark and/or harsh weather conditions. The potential dangers are the reason, for instance, why the Bob Graham club discourage unaccompanied solo attempts to run the famous round of Lake District mountains in 24 hours.

My little run in Spain was certainly no Bob Graham round and I was not in any danger but it was a reminder not to take the lonely hills lightly.