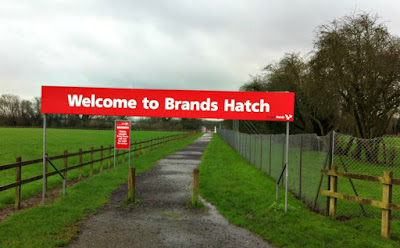 Last Saturday was a big day in British cross country. There was the Great Edinburgh International Cross Country in Holyrood Park, with some fine performances including from Alex Yee (a member of my club, Kent AC) who won the junior race for Great Britain. On the same day, various 2016 County championships were taking place across the country. I took part in the Kent Cross Country Championships held at Brands Hatch.

The course was set up in fields next to the famous motor sport racing track, and while the speed might not have have been quite up with the golden age of Barry Sheene and James Hunt, there was some good running.


The men's senior race was won by John Gilbert (Kent AC), with Max Nicholls (Tonbridge AC) in second place and Chris Greenwood (Kent AC) in third. As Max sometimes joins in the training sessions at Kent AC I am taking that as a clean sweep for the Ladywell track crew. In the women's senior race, Ashley Gibson (Tonbridge AC) was the winner, followed by Amy Clements (Kent AC) and Bryony Proctor (Aldershot Farnham & District).

In the men's team competitions there were two trophies up for grab: the '6 to score' (i.e. based on position of first six finishers for each team) and '12 to score'. The results were the same in both - 1. Tonbridge AC; 2. Kent AC; 3. Medway & Maidstone AC.

The course was over four laps (for the men) of a grassy/muddy field, at the top of a hill so fairly exposed to the elements. There was a stinging shower just after the start that was one of the most intense I've endured, and it was raining on and off for most of the races. Although there were no spectacular hills, there were a couple of long grinding ascents which took their toll. I finished towards the back but wasn't quite as sluggish as on my previous outing in the South of the Thames.

Anyway everyone has their personal race to run, and on the particularly muddy finishing strait I overtook a Beckenham runner who I had been gaining on, and hearing his efforts behind me to regain position spurred me on to a final sprint overtaking a Dartford Road Runner almost on the line. When I got my breath back I realized that the Beckenham guy was Paul who does the excellent Running Past blog, so it was a bit of a South London running bloggers face off! Of course from reading his blog I know that he would no doubt have beaten me at full fitness, given that he was almost killed when run over last year. Paul has written his own account of the race here.


I believe Saturday was the first cross country race to be held at Brands Hatch for some time, but in some ways it was a return to the early days of sport at that location. As Paul mentions at his blog, Brands Hatch started out as a cycling venue in the 1920s and several accounts mention that the first proper race held there was a four mile race between cyclists and cross country runners.  Racing Circuits Info dates this to 1928 and says that 'Rather surprisingly, the runners won, although they did have the advantage of having Australian world champion Jackie Hoobin among their number'. I'm slightly sceptical about this - the only Jack Hoobin I can find is the Australian 1950 cycling world champion

But there's no reason to doubt that a cyclists vs. runners race took part. There's some great Pathe news footage of just such a race in Walsall in 1925. On that occasion the cyclists won, but watching the film it is clear that it wasn't a foregone conclusion as the cyclists had to carry their bikes through some of the muddier patches and over obstacles.