I am continuing my effort to run in all 33 London boroughs (only 3 left to do) and today ticked off the London Borough of Brent with a run round one of the city's most iconic sporting venues - Wembley Stadium. OK I wasn't running around the pitch, but there's a good flat circuit around the outside of the Stadium that is perfect for laps of just under 1 km. 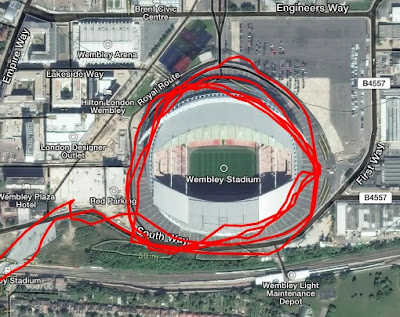 The current version of the Stadium only dates back to 2007 of course, replacing the 1920s Stadium that was demolished in 2003. But the location has nearly 100 years of sporting history, including athletics as the main venue for the 1948 Olympic Games. Obviously it is most associated with football, and most football fans will have their good and bad memories.


The high point for me was the April 1988 League Cup Final, when Luton beat Arsenal 3-2 - I can't believe that was thirty years ago next month. I can honestly say that was one of the happiest days of my life - the game had everything, Luton going ahead, then Arsenal scoring twice to take the lead, Luton keeper Andy Dibble saving a penaly and then another Luton goal before Brian Stein scored the winner in the last minute. It was pure joy in the crowd (amongst the Luton supporters anyway!), I remember me, my dad and my friend Paul just jumping around for ages. That feeling stayed with me for days afterwards, in fact I can still summon it up when I remember it. 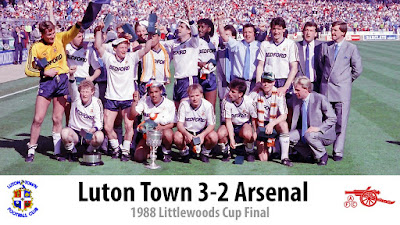 Low point was going to Wembley as a child with my dad in 1975 for the England/Scotland match. My dad bought a fold up wooden stool for me to stand on so that I could see the action from the terraces. Unfortunately as a Scotland supporter it wasn't a pretty sight - England won 5-1 (I could also  mention seeing Luton lose 4-1 to Reading in the 1988 Simod Cup Final but in my mind that has been recorded over by the victory over Arsenal a few weeks later). 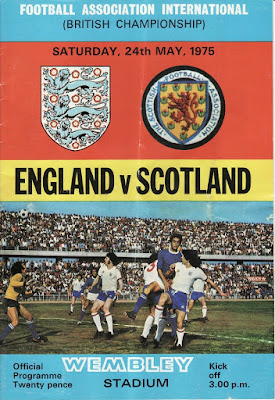 Posted by Neil Gordon-Orr at 13:26 No comments:

There seemed to be a lot of people walking around by London Bridge yesterday wearing T-shirts and the occasional crop top in the sun. I was finding it hard to believe the forecast for the next day's snow. But true enough when I woke up this morning to get ready for Hilly Fields parkrun the snow was coming down heavily in South East London.
When I got to the park it was clear that the weather didn’t seem to have discouraged anybody. I suspect that many, like me, were relishing the rare opportunity to run in the snow, especially as during the snowfall a couple of weeks ago many races and park runs were cancelled . 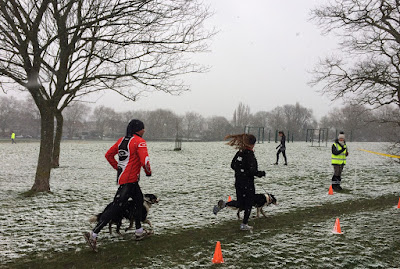 So about 250 runners in multiple layers made their weekly three circuits of the park, joined this time by members of local triathlon clubs (including Brixton Windrush, Greenwich Tritons, Westcroft and Crystal Palace tri clubs). staging their own 'mob match' race within the parkun. 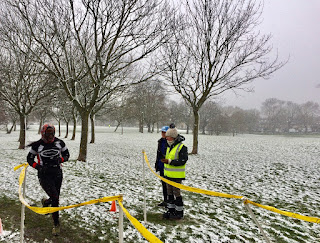 At the top of the hill the wind was blowing the snow across more or less horizontally but other than that it wasn’t too bad. I was certainly warmer running than watching others run in the cold, as I did at the Big Half and cross country nationals recently. I have been out of action with injury with last week's Peckham parkrun my first 5K effort since early January. I still can’t go too far or fast but it was great to be out in the elements with this friendly as usual crowd. I know its customary to thank the volunteers and marshals, on this occasion they certainly earned it.

Posted by Neil Gordon-Orr at 15:54 No comments: