Dungeness on the Kent coast has a famously bleak beauty, a shingle headland between Romney marsh and the Channel. Taking advantage of the September sunshine, we went down at the weekend.  A couple of intrepid members of our party swam in the sea but I contented myself with a run around the area - flat for miles around with the only real hazard apart from the occasional car  being stretches of running on pebbles. 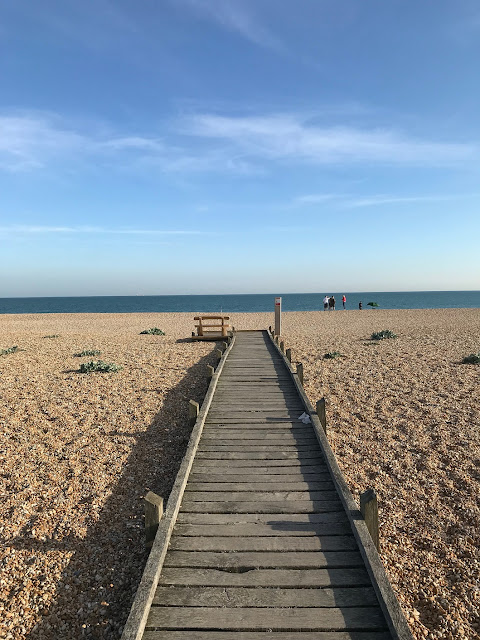 Other than than the nuclear power station there is a stretch of mainly wooden low houses in unfenced plots facing the sea, two lighthouses and a couple of pubs.  It is very much a working stretch of coast, with fishing boats pulled up on the shore as well as the decaying remains of previous seaside industry. Sea anglers certainly outunumber sunbathers, in fact I didn't see any of the latter.﻿ 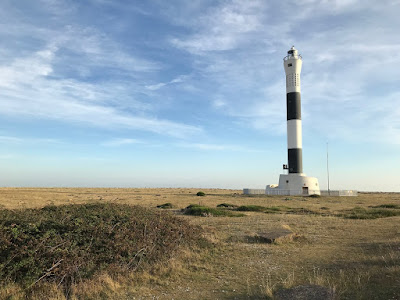 We had a drink at the Britannia Inn, and food from the Fish Hut Snack Shack which is just what it sounds like. Freshly caught fish served up with salads, rolls and wraps with a vegan alternative for those so inclined. We also popped into the End of the Line cafe, located at the local train station at the end of the Romney, Hythe and Dymchurch light railway (where there are clean public toilets incidentally). 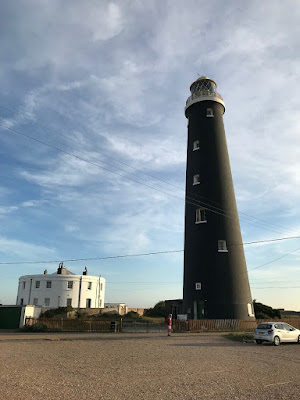 Dungeness has its own micro-climate with lots of wildlife. I saw a couple of black redstarts which are fairly rare.

Prospect Cottage, pictured below, was the home of film maker Derek Jarman (1942-1994) in the later period of his life. His Dungeness garden, built around driftwood and other beach finds, became quite celebrated and still attracts visitors. 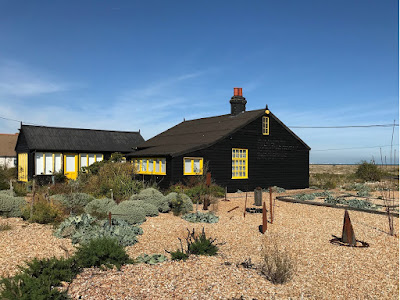 Jarman was one of the most outspoken public figures talking about living with HIV in the early 1990s, a period when I was working in the AIDS sector. I like the fact that a plaque was recently placed to mark the 25th anniversary of his death at another place he lived, Butlers Wharf by Tower Bridge (close to my work and which I often run past)

I looked back at his Dungeness diary from September 1992 (published in 'Dancing in Slow Motion') - 'Swallows swoop low around the house... The garden has never looked better'. He mentions a visit by the Sisters of Perpetual Indulgence (drag nun AIDS activists) who had annointed him a queer saint -'we all walked to the sea where the most intrepid paddled in the waves' with 'nuns changing in the loos of the Britannia Inn' 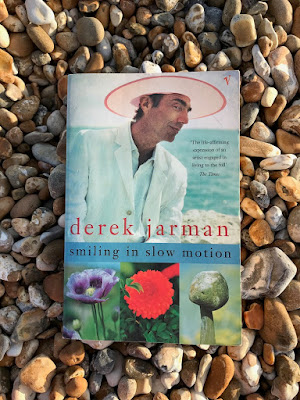 Dungeness has featured in numerous films, videos and photoshoots because there is nowhere else quite like it. The Prodigy  (Indvaders must die) and Nicki Minaj (there's a funny film of her being carried down the boardwalk while making Freedom video) have shot there, while Athlete and Trembling Bells are amongst those namechecking it in songs. I particularly like the fact that the cover of joyous noughties album ‘So much for the City’ by The Thrills was apparently shot there. The album is essentially a fantasy of West Coast USA as imagined from Ireland. The band even got to appear in the OC - let’s just say that Dungeness is a long way from the Orange County.

Posted by Neil Gordon-Orr at 19:19 No comments: