Running along the beach and elsewhere in the Monterey area is a feature of the HBO series 'Big Little Lies' (2017). This includes one episode where the three main female characters - played by Nicole Kidman, Shailene Woodley and Reese Witherspoon - are briefly seen jogging around town together (yes it has a great cast, Laura Dern  and Alexander Skarsgård also feature).

But it is Woodley's Jane character who does the most running. A lot of people use running as a kind of therapy, turning over their problems in their heads. Jane has a particularly turbulent inner life, fantasising about suicide and revenge as she runs along the sand and the cliff tops, and trying to recover memories of previous traumas. To say more would be to spoil it... 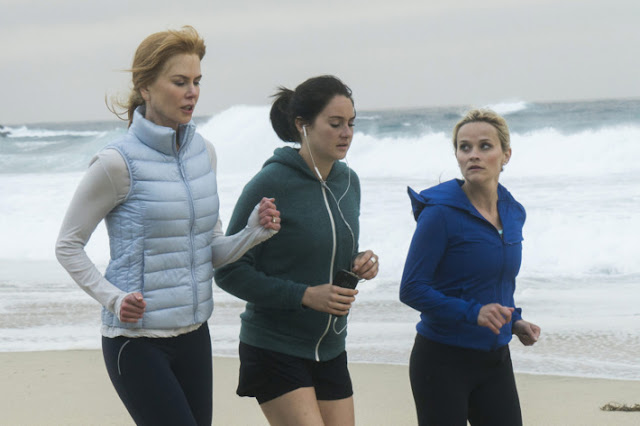 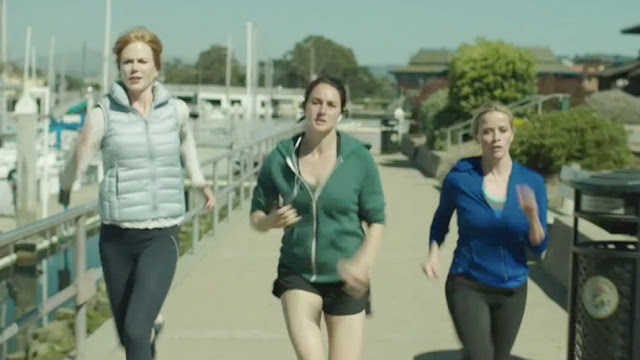 Email ThisBlogThis!Share to TwitterShare to FacebookShare to Pinterest
Labels: running on screen

'The egotism of a healthy body' & its opposite - injury thoughts

'He ran the course and as he ran he grew.
And smelt his fragrance in the field. Already,
Running he knew the most he ever knew.The egotism of a healthy body'
(Innocence by Thom Gunn)

So there's been a bit of a fuss about Strava's famous heatmap showing people's movements across the globe, including on occasions secret military bases. But for some of us Strava tells another dark story right now -  a black hole of non-activity.

Yes, it's injury time. As I mentioned before, the latter half of 2017 saw me running through a sore achilles and getting progressively slower. So my New Year resolution of seeing a physio (at Back on Track in Catford) has been achieved - with the advice that I should STOP running for at least a few weeks. I've withdrawn from the inaugural London Big Half, despite having a good for age time, and will be missing some of the highlights of the year for me - the closing races of the cross country season including the English National Cross Country Champs at Parliament Hill.

If running is part of your identity, not running threatens your very sense of self. It's what you do, it's what a lot of your friends do too. Whatever crap is going on in your life, at work or whatever, when you're running something clicks into place - yes, 'The egotism of a healthy body'. So when the body doesn't feel so healthy, the ego takes a bit of a kicking too...


Partly this pain is a case of memento mori - everybody will slow down and eventually stop, in the long run our body, our plans, maybe even our Strava profile will turn to dust or its digital equivalent - so walk (or better, run) in the light while there is light.

But we don't have to beat ourselves up and imagine that each enforced break on our journey is the end. Injury is a sign of our mortality but it does not signify weakness or some kind of failing. Most running related injuries are 'overuse' injuries, the result of pushing our bodies to their limit. The only sure way of avoiding them is to stay on the sofa.


There are very few athletes who haven't had to deal with injuries - it's part of the territory. As Alistair Brownlee explains: 'there is a trade off between the intensity of your training and the odds of you getting injured. Put simply, the harder and more intense your training, the greater the strain you are putting on your body… I could train a bit less, and I’d get less injured, but I wouldn’t be as good. Or I could train as much as I do, take the risk of being injured and be the best I can.… here’s the thing: I’d rather be as good as I can be and maybe have a shorter career through injury, than never know, or cruise. It’s always been about how good I can be. How hard can I push it? How much training can I do, how fast does that make me? I’d prefer to have three or four cracking years of winning stuff than have 10 years of being average' (Swim, Bike, Run: Our Triathlon Story).

Of course  most of us aren't 'winning stuff',  let alone Olympic golds, but we all have our goals and standards and pushing towards them entails running along the edge between optimum training intensity and overdoing it. Unfortunately we generally only know we've crossed over from one to the other when it hurts too much to go on.

I have been greatly inspired by the recovery from injury of some much more talented runners than me in my own club, Kent AC. In the past few weeks Alex Yee, badly injured coming off his bike in triathlon a year ago, won the BUCS cross country champs; John Gilbert won the Southern Cross Country Champs having had a tough year or two; and Alison Thomson was in the top ten parkun times in the UK having been unable to manage a jog this time last year.

Russell Bentley is back running up hills and mountains after slicing his leg open on a rock in a mountain race only last October. He too had his moments of 'experiencing self-doubt. Sense of perspective goes out the window... I can now understand why all those other running bloggers don’t want to blog about it. Your self-worth is questioned, you don’t think anyone will be interested in anything you have to say'. Another Kent AC blogger, Lawerence Avery, was out of action for several months with a stress fracture. As well as obsessively cross training,  'Being injured also made me think about how I might stay part of sport once I’m either too crocked or too old to compete, or what else I could do now alongside competing. I’ve been an obsessive reader about the sport and training methods ever since I started running, so making the leap into coaching was an obvious one'.  Lawrence has taken the England Athletics Coaching Assistant qualification and started coaching others in the club, but he's not done running yet. Good to see him back in action in Surrey League last week, which I went along to watch and cheer rather than run. The course was so narrow in parts that following the action meant running part of the course,at which point I wished I had joined in - but realistically I would have been hobbling by the end of the first lap.

I don't expect to ever be in anything approaching the same form as these guys, even for my age, but it's great to see people getting back to where they were before, or even better, after injury.  I've put on hold any running goals for now, other than gettting my parkrun volunteer t-shirt,  while trying to keep fit in the gym and hoping for recovery in time for the summer.


(yes I am aware that the Thom Gunn poem is actually about a youth who grows up to be a nazi soldier - the egotism of a healthy body can end up in some very dark places!)
Posted by Neil Gordon-Orr at 13:41 No comments: