Reading Half Marathon last month (April 3rd) was a big event, more than 15,000 runners starting out in the Green Park business park on the edge of the town and running a route that took in the University campus and the town centre before finishing in the Madejski Stadium (home to Reading FC and London Irish rugby club).
The men's winner was Robert Mbitha in 1.02.57 while first woman finisher was Jenny Nesbitt (Worcester AC), running her first half marathon in 1:12:54 (Jenny is a prolific running blogger at Run With a Smile) . 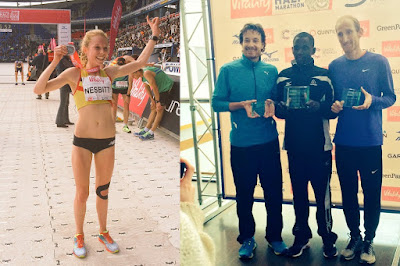 This was the 33rd Reading Half, and the race has clearly become a significant fixture in the town's calendar as well as for runners, including those preparing for Marathons later in the spring. There were big crowds in parts of the course - especially in the town centre - along with cheerleaders, bands, DJs and even free beer for runners during the race at the Nags Head pub.
Towards the end of the course a band was playing Chic's Good Times and in my state of semi-exhaustion I understood for the first time that this song isn't a paean to Studio 54 disco hedonism after all but is in fact an exhortation to chase PBs! Sadly it wasn't to be for me, I finished 20 seconds outside PB.
I made the obvious mistake of charging off after a pacing group that was going much faster than my target time, it was great for the first 8 miles or so then there came a point where the route climbed up hill out of the town centre and I just started to flag. I tried to push hard in the final mile but it was too late. Just after finishing I collapsed with the worst attack of cramps I've had - it felt like all the muscle groups in both legs gave up a the same time. A sign that I hadn't really trained properly either - I think after running a Marathon last year I had a blasé attitude of 'well it's only a half'. I imagined that a vigorous winter of cross country with the odd longer run would be enough to carry me through.
So the lessons are keep to target pace and respect the distance - 13 miles at race pace is a long way! 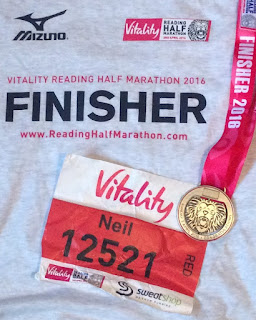 Reading has a reputation for being a fast course, which it may well be, but don't let anyone tell you that it is flat!

The race is very well organised, one thing to note is that depending on your start position it can be quite a walk to the start from the baggage/toilet area.
(my time 1:38:55 - strava) 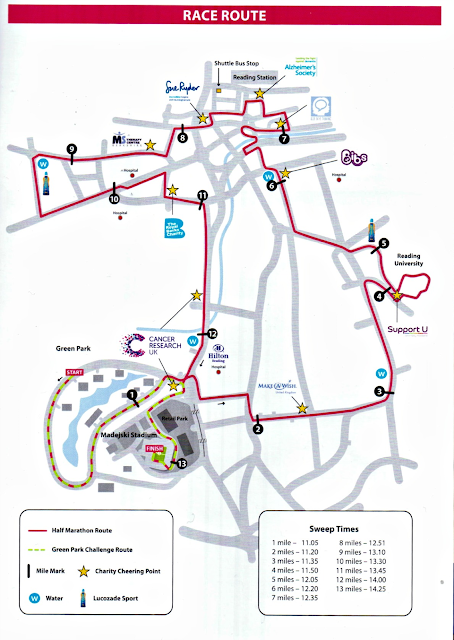 Email ThisBlogThis!Share to TwitterShare to FacebookShare to Pinterest
Labels: 2016, Reading Half Marathon