Secret Rivers, a recent exhibition at the Museum of Docklands, highlighted London’s lost and neglected waterways. As the city spread in the 19th century rivers and streams were increasingly covered up and diverted underground through pipes and sewers. Still for the most part they continue some kind of subterranean existence and we may even find some ghostly traces remaining above ground.

One such 'lost river' is the Peck, which apart from one small section has largely disappeared from view in its South London home. A couple of weeks ago I set out to run its course.

I started from One Tree Hill at Honor Oak close to the supposed source of the river, always a bracing run up to the summit from Brenchley Gardens. From the top there are great views across London. I paused too to remember the time I played three-sided football there 20 years ago!

. There's no sign of the river here or on its route flowing down to Peckham Rye, although running down Kelvington Road/Cheltenham Road towards the Rye you do pass another hidden body of water - the covered Honor Oak Reservoir with its improbable Aquarius Golf Club course on top.

Peckham Rye park is the only place where a section of the Peck can still be seen.
Along with many other runners I have lapped this park many times during Peckham parkrun. The course crosses the narrow stream and its rivulets five times so each parkrunner crosses 15 times every Saturday morning. 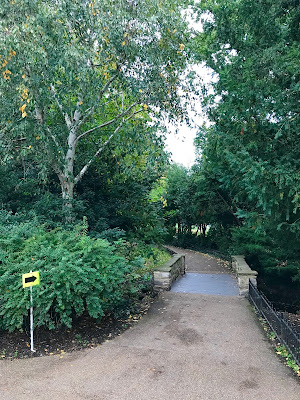 The area of the park through which the stream flows was first laid out in the late 19th century with its current course there being the result of human landscaping. It is sometimes little more than a trickle, but at least here the water can be seen and appreciated. 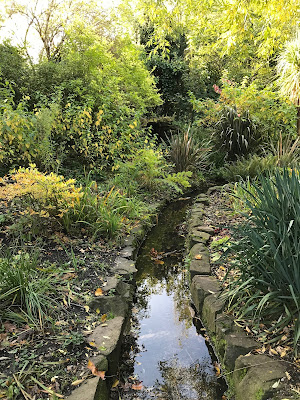 One part of the park is known as the Sexby Gardens, named after horticulturist and first Superintendent of London County Council Parks Department, Lt-Colonel J.J. Sexby who oversaw the development of many London parks. His fascinating 1905 book ‘The municipal parks, gardens, and open spaces of London; their history and associations’ includes a description of the Peckham Rye water features:  'In a secluded hollow delightfully shaded with trees a lake has been made. It has an island in the centre and is fed by a small watercourse running though the grounds, which has been formed into a number of pools by artificial dams. This rivulet has its source in a fountain springing out of the rockwork, and thence meanders through the park, receiving some life when babbling over some miniature waterfalls before its entrance to the lake' (you can read/download the whole book for free at archive.org)

The river now disappears underground with its course following the western edge of the park (Dulwich side) towards Peckham. Greenwood's 1830 Map of London  shows what seems to be a pond fed by the river on the north end of the Common, the triangle now cut off by East Dulwich Road. This was also the location of Peckham Lido which was open from 1923 to 1987 - plans have been put forward to rebuild it, we can only hope.

The map shows the river carrying on down Peckham Rye, past the White Horse (a pub of the same name still stands on the same spot) and then more or less  following the line of what is now Copeland Road, with a footpath alonside it. In the 1830s it seems to have filled a pool in what is marked on the map as a brick field site - this may have been a result of quarrying rather than a natural feature.

After that the river is believed to have crossed Queens Road and headed towards the Old Kent Road crossing it at a point somewhere north of the the Ilderton Road junction - I ran down Consort Road, Kings Grove and alongside Brimmington Park to Old Kent Road then crossed over and ran down Ormside Road before joining Ilderton Road. Somewhere in the vicinity of South Bermondsey Station the Peck joined the Earls Sluice, another now buried stream which still flows on to the Thames - but today as part of an underground sewer. I will return to the Earls Sluice another day.

﻿
﻿
Here's my River Peck running route - full details on mapmyrun - just under 7k  though I actually ran 12k getting to and from the route. It's an approximation of the course of the river, as there are fences, railways and buildings in the way 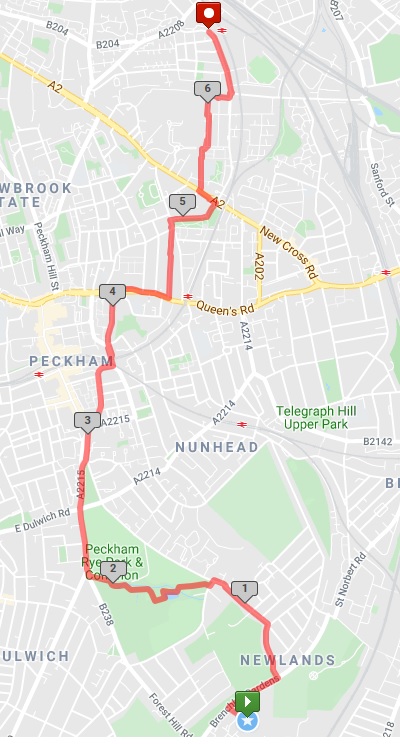 Posted by Neil Gordon-Orr at 21:46 No comments: