Among school reports and other memorabilia kept by my Mum I recently came across two stapled, duplicated sheets giving details of a cross country race I took part in way back in November 1975, when I was 12 years old.
The event was organised by Luton United Athletic Club at Stopsley, with a young boys race for the 'White Trophy', the 'Ninth annual colts cross country race' which I took part in over two miles, and the 'boys cross country relay race' (4 x 2 miles). Not sure of the age rages, the young boys is described as under 12s and I am guessing that the colts was 12-14s and the boys 14-16.
It seems to have been quite a big event. I ran for my school, Icknield High, but there were also clubs from across the country taking part such as Aldershot, Farnham & District AC,  Shaftesbury Harriers, Thames Valley Harriers, Hillingdon AC and Havering AC. Prizes were presented by Tony Simmons, the Luton runner who had won the 1975 National Cross Country Championships, also held in Luton at Stopsley, and was to go on the following summer to come 4th in the 10,000m at the 1976 Montreal Olympics (he now coaches the great Kate Avery). 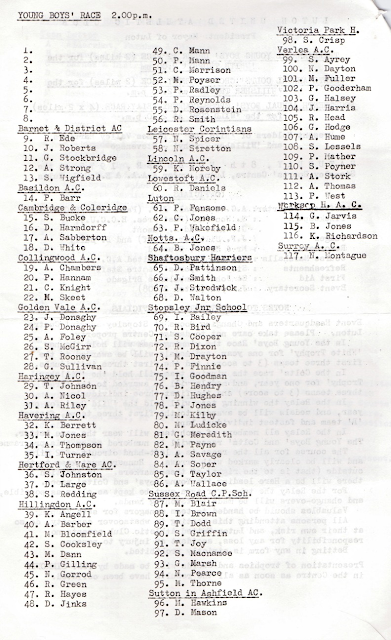 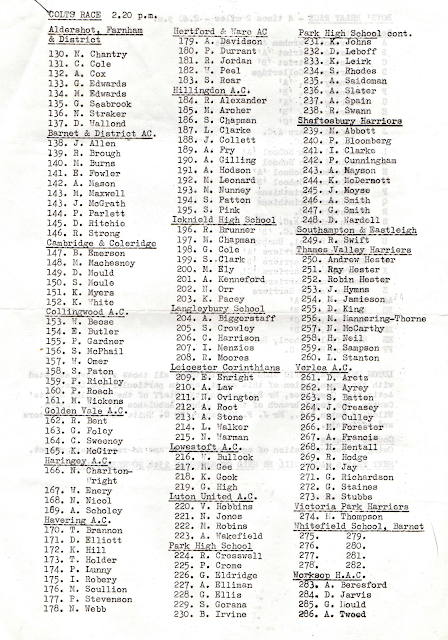 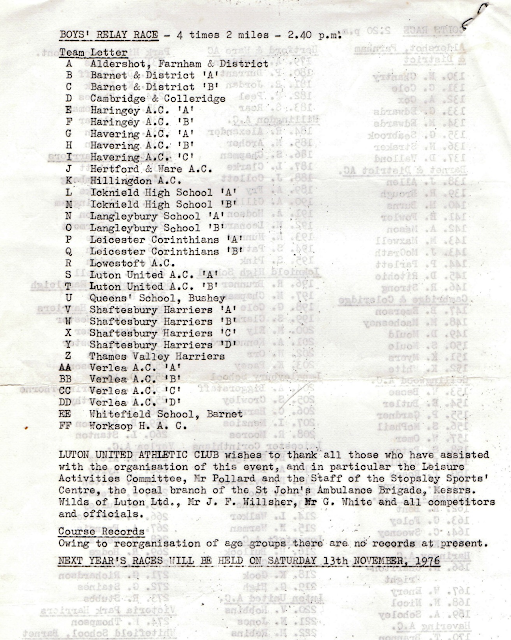 I've no idea how I did but I doubt if I set the town alight. In PE lessons I usually finished at or near the top in cross country runs around the playing fields and adjacent marshes - I like to think that this wasn't just due to not stopping for a smoke - and this led to me sometimes running for the school team. The only record I have of an actual result is from February 1977 when I wrote in my diary 'I ran in the Luton schools cross country championships at Stopsley. The snow covered course was 3 miles long. I came 79th out of 103, I was 4th out of 15 for our school'.  I also recorded that I had run the most laps for my class in 'a sponsored run for the school mini bus fund' doing '14 laps in 28.5 minutes', as well as coming to second to last in 800m on school sports day.
It was to be more than 30 years after leaving school before I took part in another race. I know some people who return to running in their middle age regret the lost years and wonder how well they could have done if they'd kept at it when they were younger. I've no doubt that if I'd trained as hard as I do now in my 20s and 30s I would have got some faster PBs than I am now ever likely to achieve, but in those days staying up dancing was my only endurance exercise.  My school record suggests in any case that I would probably have ended up at a similar level to where I am now. At school I was good enough to be picked for the team, but not good enough to finish near the front in competitive races. And today I am usually one of the first in age category at parkruns, but towards the back quarter in serious club competitions.  In fact I haven't made much progress since the mid-1970s - my 1500m PB when I was 14 was 5:52, last year I ran the slightly longer City of London Mile in 5:55. Perhaps I could just about take down my 14 year old self, but then again I am at least six inches taller!

Posted on 'I was, or am a runner!' group on facebook this is a  preview of the 1975 English National Cross Country Championships mentioned above, held at Stopsley in Luton: 'Runners who believe in real cross country should have no complaints about the course in Luton today... The three miles lap takes in a very steep hill and a long section of plough as well as grassland. Conditions will be muddy'. Luton's Tony Simmons ('The Man to Beat') won this race, while Steve Ovett (described here as 'dark horse') won the Junior race.