Beinn Bheigier (pronounced Ben Vicar) is the highest hill on the Isle of Islay. With a height of 491m it falls short of the 600m that would make it a mountain (at least by the official UK government definition), but it is a fair height and its summit is suitably remote.

Our starting point was at the pebbley Claggan Bay, reached by following the single lane road that heads north east up country beyond Ardbeg until the road almost runs out. Just past the little road bridge that crosses the Claiggan river, there is a track on the left heading up towards Beinn Bheigier.


You can follow this vehicle track as it loops around, first to the left, then to the right, going through a deer gate until it stops. Or you can take a bit of short cut across the loop - shortly after the track turns to the left, there is a gate on the other side of a ditch after which if you head north west will bring you at the same place - the deer gate in the fence before the last section of vehicle track (we went up this way, and came back on the longer but easier full track loop)


The lower slope of the hill is hard work, with tussocky grass and lots of heather. You never quite know whether you are stepping on firm ground or into a bog. 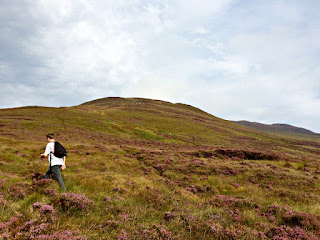 You will hopefully find a path to follow, a faintly visible track of trampled dry heather, but if not the thing to remember is that you are heading to the south east shoulder of the hill (i.e the left hand side as you going towards it). 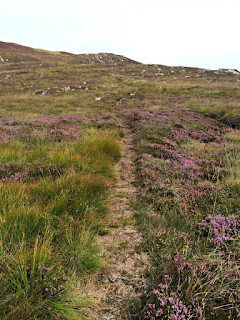 There is a cairn at the top of this slope but that's not the top. From here there is a stony ridge and a mostly more gentle slope which heads north west for about a mile upwards to the summit. There is a trig point at the highest point surrounded by a dry stone wall for shelter on what can be a windy exposed spot with good views across the sea to Ireland and the Mull of Kintyre.

There is an account of 'dubious veracity' of a battle between MacLeans and McDonalds at Beinn Bheigier in the late 16th/early 17th century, described by Islay historian David Caldwell as 'an unlikely place for a battle' ('Islay: the Land of the Lordship', 2008, p.93). It certainly would have been hard work fighting up here, but it's just possible I suppose that there could have been a look out point worth fighting over. 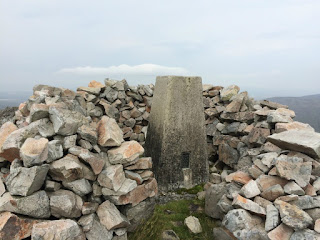 The area is used for deer stalking, and a sign back in Claggan Bay gives advice on this - essentially walkers are welcome, but look where you're going in the main stag stalking season (mid-August to mid-October). Seeing deer up on the hill, including right at the top, is one of the highlights of the walk. Of course we have plenty of deer in some London and SE England parks - stags were bellowing as we ran in the Surrey League cross country in Richmond only last week - but you don't see them in full motion in quite the same way. At the top of Beinn Bheigier we watched a young deer charge off down a steep slope like it was almost flying, It put me in mind of Nan Shepherd's observation in her great book on the Cairngorms, 'The Living Mountain': 'Bird, animal and reptile - there is something of them all in the deer. Its flight is fluid as a bird's... They seem to float; yet their motion is in a way more wonderful even than flight, for each of these gleaming hooves does touch the ground'. 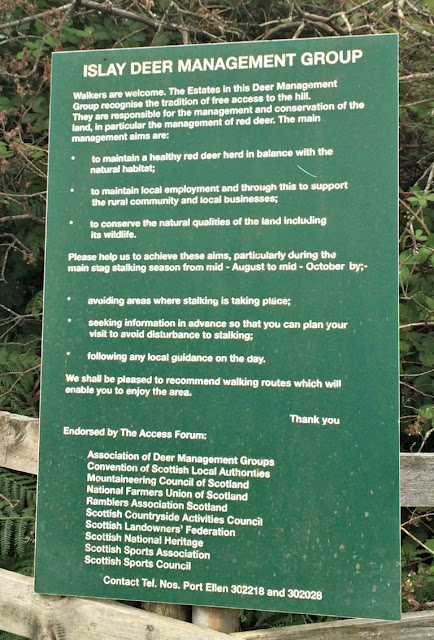 As always hill walking in such areas, be prepared for changes in the weather. You can start off in bright sunshine at the bottom, and find yourself cold and lost in the clouds on the top.

The walk was just over seven miles there and back, taking us three hours. My strava route is here, I found the Walk Highlands reports useful in planning the walk - you can download a GPX file to help. 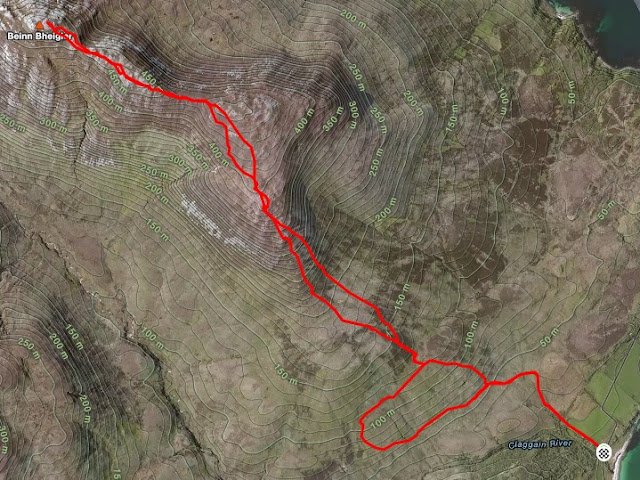 Islay running posts:
Bridgend Woods
Bowmore to Gartbreck
Bowmore to Cruach and beyond
Big Strand to Kintra
Three standing stones in three miles from Port Ellen
Port Ellen to Kilnaughton and Singing Sands
Posted by Neil Gordon-Orr at 13:10 No comments:

BBC's excellent (tragi)comedy 'Fleabag' features Phoebe Waller-Bridge's character running around a a cemetery in Episode 3- I think it may be Kensal Rise cemetery in West London.

Her sister tells her 'it's really inappropriate to jog around a graveyard... flaunting your life'. That's something that I once pondered in relation to Nunhead Cemetery, but decided it was OK as long as the recently bereaved aren't wandering around. What do you think?