Woke up this morning and shed a tear or ten on hearing the news about the death of David Bowie. Others have spoken very elequently about Bowie today - I particularly liked Robert Elms' contribution when talking to Vanessa Feltz on BBC Radio London. I often think about Bowie when I'm running around the parts of South London where he lived earlier in his life, in particular in Beckenham (he once lived in Foxgrove Road, near the home of Beckenham Running Club)

I guess his most direct contribution to athletics was in the 2012 London Olympics where Team GB marched in the opening ceremony athletes parade to 'Heroes'. But there are a couple of very memorable running scenes in movies, both set to his 'Modern Love'.

The first is in Leos Carax's 1986 French movie 'Mauvais Sang' (Bad Blood - released in English as 'The Night is Young'), in which there is an amazing acrobatic dance/running sequence featuring Denis Lavant.

The scene starts with the lovers listening to the radio - Bowie comes in at around 2:28:

Incidentally there is another running sequence at the end of the film with Juliette Binoche sprinting across an airfield.

Mauvais Sang was presumably an influence on Noah Baumbach's 2012 movie Frances Ha, as the director chose to again use Bowie's Modern Love to soundtrack for an equally joyous run, this time featuring Greta Gerwig on the streets on New York 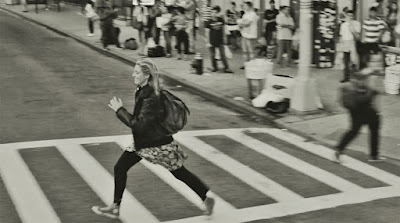