Hare and Hounds or Paper Chase is a running game that seems to have been particularly popular in 19th century English public schools, and indeed many of the modern athletics clubs that developed later in the century grew out of Hare and Hounds clubs (see for instance the still-extant Thames Hare and Hounds cross country club, based at Wimbledon Common, which dates back to the 1860s).

Here's an explanation with illustration from 'Every Boy's Book: A Complete Encyclopædia
of Sports and Amusements' (1869), edited by Edmund Routledge. Did they really run up to 15 miles in blazers and ties? 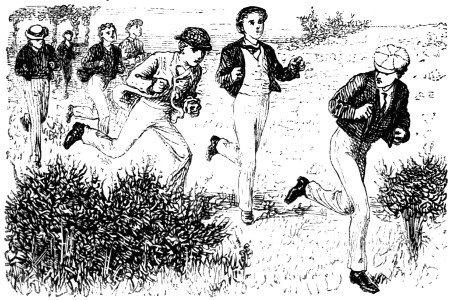 'This is perhaps the very best game that can be introduced into a school. The principle of it is very simple, that one boy represents the Hare and runs away, while the others represent the Hounds and pursue him. The proper management of the game, however, requires some skill. When we were at school in the north, this game was extensively played; and in more recent times, when we ourselves were masters instead of scholars, we reduced the game to a complete system. The first thing to be done is to choose a Hare, or if the chase is to be a long one, two Hares are required. The Hare should not be the best runner, but should be daring, and at the same time prudent, or he may trespass into forbidden lands, and thereby cause great mischief. A Huntsman and Whipper-in are then chosen. The Huntsman should be the best player, and the Whipper-in second best. Things having advanced so far, the whole party sally forth. The Hare is furnished with a large bag of white paper torn into small squares, which he scatters on the ground as he goes. An arrangement is made that the Hare shall not cross his path, nor return home until a certain time; in either of which cases he is considered caught. The Hounds also are bound to follow the track or “scent” implicitly, and not to make short cuts if they see the Hare. The Hare then starts, and has about seven minutes’ grace, at the expiration of which time the Huntsman blows a horn with which he is furnished, and sets off, the Hounds keeping nearly in Indian file, the Whipper-in bringing up the rear. The Huntsman is also furnished with a white flag, the Whipper-in with a red one, the staves being pointed and shod with metal.

Off they go merrily enough, until at last the Huntsman loses the scent. He immediately shouts “Lost!” on which the Whipper-in sticks his flag in the ground where the scent was last seen, and the entire line walks or runs round it in a circle, within which they are tolerably sure to find the track. The Huntsman in the meanwhile has stuck his flag in the ground, and examines the country to see in what direction the Hare is likely to have gone.When the track is found, the player who discovers it shouts Tally ho! the Huntsman takes up his flag, and ascertains whether it is really the track or not. If so, he blows his horn again, the Hounds form in line between the two flags, and off they go again. It is incredible how useful the two flags are. Many a Hare has been lost because the Hounds forgot where the last track was seen, and wasted time in searching for it again. Moreover, they seem to encourage the players wonderfully. We used often to make our chases fourteen or fifteen miles in length; but before such an undertaking is commenced, it is necessary to prepare by a series of shorter chases, which should however be given in an opposite direction to the course fixed upon for the grand chase, as otherwise the tracks are apt to get mixed, and the Hounds are thrown out. The Hare should always carefully survey his intended course a day or two previously, and then he will avoid getting himself into quagmires, or imprisoned in the bend of a river. A pocket compass is a most useful auxiliary, and prevents all chance of losing the way, a misfortune which is not at all unlikely to happen upon the Wiltshire downs or among the Derbyshire hills'.
Posted by Neil Gordon-Orr at 23:36