The 2017 English National Cross Country Championships took place on Saturday February 25th at Wollaton Park in Nottingham. I took part in the senior men's race, one of nearly 1800 who made it round the 12k course. 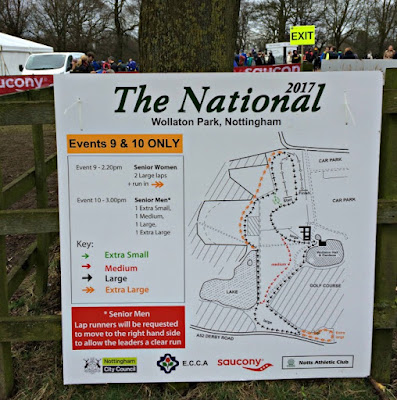 The course itself was decidely 'interesting', a spiralling series of four loops each slightly longer and different from the previous. There were a number of photogenic water and mud features, a longish sticky patch on last lap being particulary tough, but provided you negotiated these without falling or losing a shoe you always knew that you would soon be on a long runnable stretch. In that respect I found it a lot more pleasant than the Parliament Hill course where the mud can sometimes seem to stretch on forever (the English nationals will be returning there for 2018)

There were two main uphill sections on the course- one just before the descent to the finish line (which the senior men covered four times), and one climbing up to towards Wollaton Hall (a feature of three of the men's laps - the women's course was shorter).  Trudging up that hill put me in mind of the old folk song 'In Nottingham town, not a soul would look up, not a soul would look down'.

﻿
Wollaton Hall features in The Dark Knight Rises as Wayne Manor, but there were no batman costumes in this race - it was no fun run!

It was my third National and I improved slightly on last year at Castle Donington, finishing 28 places ahead in a similar sized field - making me in the 79th rather than 83rd percentile with a mere 1395 runners in front of me! 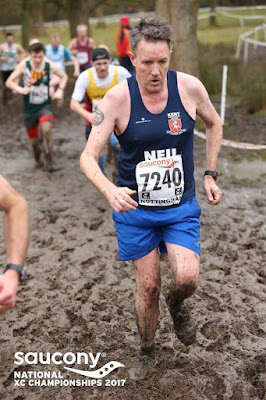 As for the club, Kent AC finished 11th in the senior men's competition and 12th in the senior women, a good result. Well done to Tonbridge AC and Aldershot, Farnham & District AC for winning the men's and women's champs respectively.

A big group of us travelled up from London, with 40 runners competing across the various races, most of whom stayed over for post-race celebrations in Nottingham. We ended up in Ye Olde Trip to Jerusalem (pictured below) built into the rocks by Nottingham Castle and purportedly the oldest pub in England. I'm sure it has seen worse than a few rounds of jager bombs with South London's finest. Hangovers were cleared with some early morning runs before heading home, I did 12 miles along the canal and the River Trent, passing near to Trent Bridge cricket ground and the City Ground of Nottm Forest. 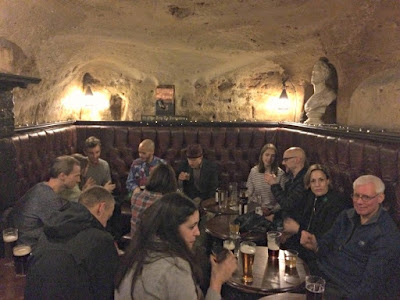 End of the season

So that was the end of the cross country season, for me at least. The month before I ran in the South of England Cross Country Champs at Parliament Hill, finishing five minutes faster than at the Southerns last year on the same course - but it must be said conditions this year were a lot less wet and muddy than in 2016 (me below at end of first lap, didn't look quite so spy after nine miles). 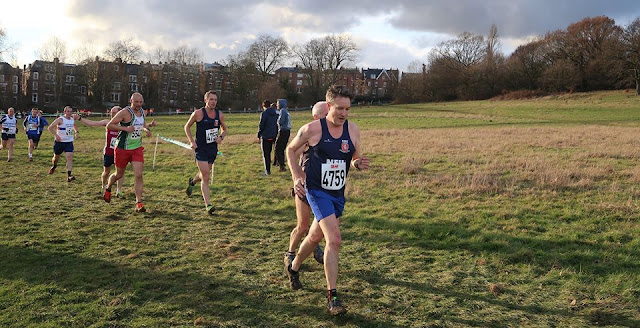 Also last month I ran in the last fixture of the 2016-17 Surrey League, at Wimbledon Common on February 11th. I hotfooted there from Farthing Down near Coulsdon where South London Harriers hosted the final D1 women's race of the season on a snowy course along Happy Valley.

Must admit I was a bit disappointed that there was no sign of snow at Wimbledon, though picturesque conditions aren't everything and Kent AC won the men's title for the 5th year in a row.