So 2017 wasn't the year I got into swimming, though I did do a bit, most pleasurably in the tidal pool on Margate sands and briefly in the Atlantic at Estoril in Portugal.

This year I am determined to get some adult lessons so that I can master the breathing and be able to keep going for longer distances. In the mean time, by way of inspiration here's some swimming related art which I saw in the last year

David Hockney's polaroid collage 'Gregory swimming, Los Angeles, 31 March 1982' (detail below) was one of a number of swimming pool pictures included in his retrospective at Tate Britain 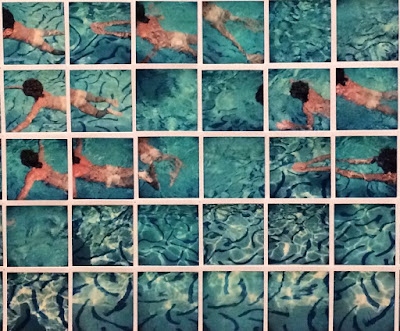 Duncan Grant's 'Bathing' (1911) was orginally painted as a mural for the dining room at the Borough Polytechnic, at the Elephant and Castle, London (now London South Bank University). It was included in the 'Queer British Art' exhibition at Tate Britain. 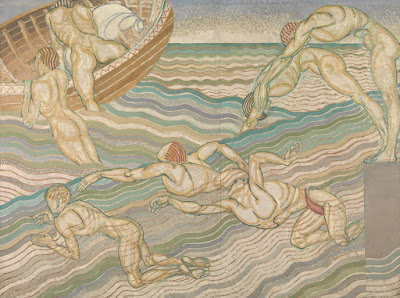 Donna Huddleston's large scale drawings were some of the strongest work in 'Dreamers Awake', a Summer 2017 exhibition at White Cube Bermondsey of work by women surrealists and contemporary artists working in a similar vein.
Huddleston's The Warriors (2015) places a group of young women by a pool like figures in an ancient Egyptian mythical landscape. The artist apparentingly drew on her memories of her school netball team in Australia, the 'Woolloomooloo Warriors’


See previously in 'Art of Athletics'