I did Peckham Rye parkrun again at the weekend, with about  around 250 people doing a 5k in an area that  can claim to be one of the birth places of modern English athletics. Some of the runners were from established local running clubs like Kent AC or Dulwich Runners, some from informal local groups like Runhead AC (who run every Tuesday from the Beer Shop in Nunhead), many just enjoying being part of the parkrun crew. But it is two of the oldest established London clubs, no longer based in the area,  who trace their origins back to Peckham Rye:

'South London Harriers was formed on 27th December, 1871 at a meeting in the Vivian Hotel, at 34 Philip Road (now known as Philip Walk), Peckham Rye, SE15. There was a similar Club close by in Peckham Rye, which was founded at "The King's Arms", as Peckham Hare & Hounds in October 1869, before soon changing its name to Peckham Amateur Athletic Club (PAAC). It later moved to "The Rye House", and in July 1878 moved from the Peckham Rye area to become the Blackheath Harriers' (SLH: A Brief History)
Both clubs moved away from Peckham as it became more urbanised, but are still going strong elsewhere. SLH  has its  clubhouse in Coulsdon, while Blackheath & Bromley Harriers AC is  based at the Norman Road track in Bromley (and with a clubhouse in Hayes).

A notable Peckham athlete was a pioneer women's jumper and the first to clear five feet in the high jump. Phyllis Green (1908-99) was born at 12 Rye Lane where her father Henry Green managed the undertakers. He was a member of Peckham Harriers so no doubt encouraged his daughter who as a 17 year old at Peckham High School for Girls 'set her first world best of 1.51 metres at London's Stamford Bridge in June 1925, and equalled that mark in Brussels a month later. She raised it by half an inch when winning the WAAA title at Stamford Bridge on 11 July 1925, becoming the first woman to clear 5 feet (1.52 metres).  At another London venue, Chiswick, she improved her world best to 1.55 metres (5 ft 1 in) in 1926 and her highest ever jump was 1.58 metres (5 ft 2¼ in) at the 1927 WAAA championships off a grass take-off at Reading’ – the end of a short but successful competitive career . She also held the British long jump record for a while and her personal best of 5.52 metres in 1927 was only 5 cm short of the then world record.  She told a reporter in 1925 that ‘I have always jumped from the time I learned to walk…'I never went round an obstacle—I always jumped over it.' (source:  Mel Watman, Women athletes between the world wars, Oxford Dictionary of National Biography, 2012)
These were the early days of women’s athletics - the Women’s Amateur Athletics Association was only founded in 1922, and Phyllis Green belonged to the London Olympiades Athletics Club, the first women’s club, set up in 1921 in a period when many running clubs only admitted male members.

The only picture I have found of Phyllis Green is an etching by Percy Smith (1882-1948), held in the collection of the Birmingham Museum and Art Gallery 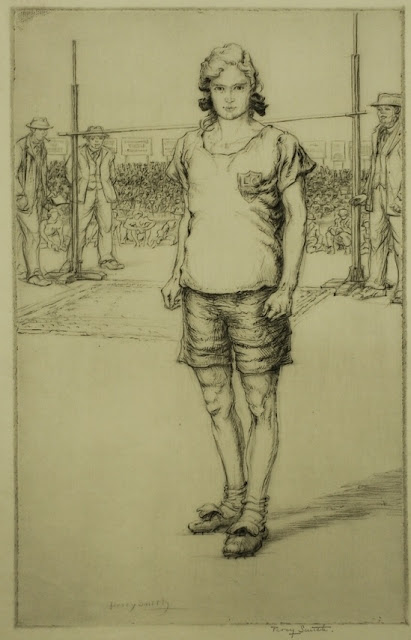 (see Running Past for details of the first WAAA championships, held at Downham in 1923)