As several other running bloggers have noted before (including Run Dangerously and Run and Jump), the late great Joe Strummer of The Clash apparently ran several marathons. 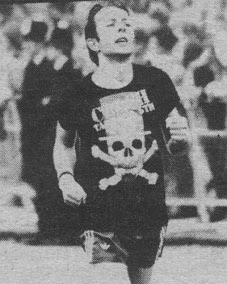 According to Chris Salewicz in 'Redemption Song: The Ballad of Joe Strummer' (2006), in April 1981 'wearing a "Clash Take the Fifth" T-shirt, Joe Strummer, the man who as a boy had been his school's cross-country running champion, ran the London Marathon. He took Gaby [Salter, his then girlfriend] with him - she made it halfway before dropping out. "He hadn't even trained. He just bought some shorts and said, "let's run a marathon". Even in personal relations Joe played his cards close to his chest: he never mentioned to Gaby that he had been the top runner at his school'.

Salewicz also says that in May 1982 Strummer ran in the Paris Marathon (as did Gaby Salter) during a short period when he was hiding out in the city while 'missing' from the band.

Another blog has queried whether this is true, pointing out that there's no photographic evidence of Strummer running in Paris and that in the 1981 picture (above), he hasn't got a bib with his number on it. The picture looks like it was taken at the Marathon or a similar event though (note police and crowd barriers)- maybe he wasn't an official entrant and sneaked in to run all or part of the race in this first year of the event.

There can't be any doubt about the 1983 London Marathon though. 'Like Punk Never Happened' has recently scanned in the whole of 'Smash Hits' magazine from April 28th 1983, and it includes the following piece. This states that Strummer ran in aid of Leukemia research with runners from 'The Sun' newspaper team,  with a finish time of four hours and 13 minutes.