I saw in 2014 with a New Year's Day 5k Dulwich parkrun. It was wet and windy, but 172 runners decided to get cracking on their New Year resolutions early.

Parkrun has been taking place in Dulwich Park since April 2012. It is one of the smoother, faster parkruns in London, with three circuits of the park on tarmac all the way round, mostly fairly flat (runners sometimes complain about the slight gradient on part of the course, but there's certainly no hill).  Sarah Watson is currently the fastest female finisher with a time of 17:31, Thomas Payn holds the men's record with 15:01 - getting on for a minute quicker than the best time at my really hilly home run at Hilly Fields.  So yes, the course does make a difference, though I have run faster times at Hilly Fields than I managed at Dulwich Park on New Year's Day. Then again I had been up drinking and dancing into the early hours the night before.

There's nearly always people running in the park, and the area boasts two local running clubs in addition to the weekly parkrun - Dulwich Park Runners, based at the Trevor Bailey Sports Club on The South Circular opposite the park and Dulwich Runners AC, who have their main club night at The Edward Alleyn Club in Burbage Road, SE24. There are also various other running events in the park - such as the annual Cystis Fibrosis Dulwich Park Fun Run (next one on May 31 2014). 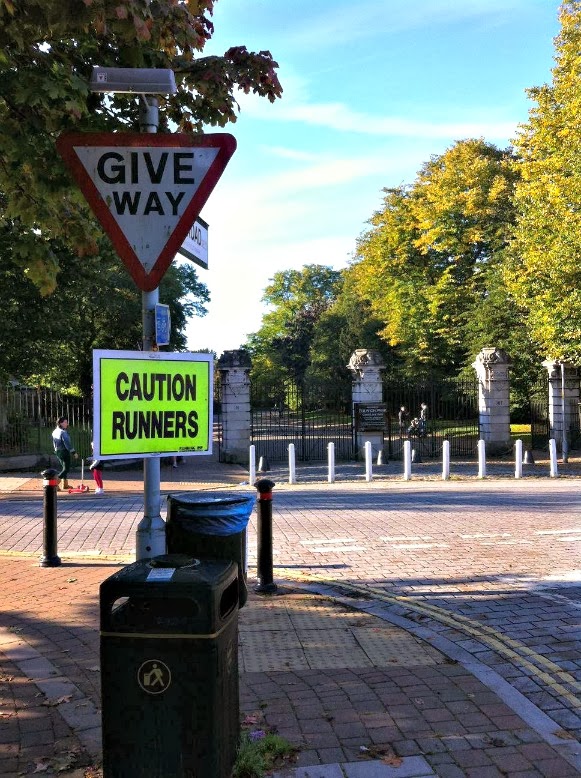 Back in October, I took part in the Dulwich Runners Charity 10k, with 213 runners starting off and finishing in the park, but also taking in a section of the South Circular Road and Dulwich Village (all photos in this post except the top one from New Years Day are from that race). A PB for me, but  I strained a muscle in my thigh and ended up out of action for a month. In fact I was relieved to come away from the park on New Year's Day uninjured as on my previous parkrun there in June my vision started to blur and by the end of the day I was in Kings Hospital Accident and Emergency with a temporary loss of vision (seemingly related to damage from my contact lenses). 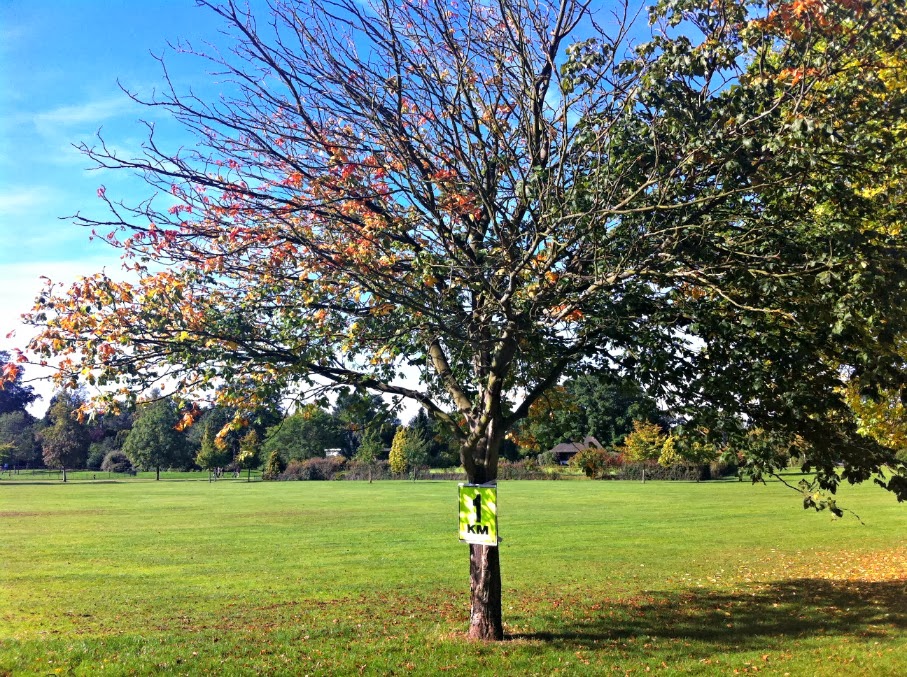 The park holds many happy memories for me, wandering through the Rhododendrons with my kids, seeing a great outdoor performance of Alice in Wonderland from Bubble Theatre, cycling over from Brixton the first time I stumbled across it. It has a good cafe, and just outside the various food and drink establishments of Dulwich Village. And yes it does feel a bit like a rather posh Surrey village, though sometimes this is overstated. Once I overheard a shopkeeper say 'there's a lot of outsiders in the village today'- well it is in one of the world's biggest cities and just down the road from Peckham and Brixton!


The park itself was opened in 1890, on former farm land and meadows that had belonged to the Dulwich Estate before they donated it to the Metropolitan Board of Works (later London County Council). The origins  and wealth of the Dulwich Estate go back to Alleyn's College of God's Gift, founded  by Edward Alleyn, the Shakespearian actor who made his money from playhouses, bear pits and brothels on the South Bank of the Thames. He set up the charity for the benefit of poor scholars, though the main beneficiaries seem to have ended up being the associated elite fee-paying schools of Dulwich College, Alleyn's School and James Allen Girls School. Oh well at least the rest of us got a park out of it to run around!  Dulwich College, once attended by the likes of Raymond Chandler, P.G. Wodehouse and more recently Chiwetel Ejiofor, is another part of the running mix in the area. It has a strong tradition of cross country running and its own running track - also used for training sessions by Dulwich Runners.

The nearby Dulwich and Sydenham Hill Woods are also popular with runners, offering a woodland trail within easy reach of inner South London (well for me a run from New Cross to the woods, round them and back again is a good 10k run). 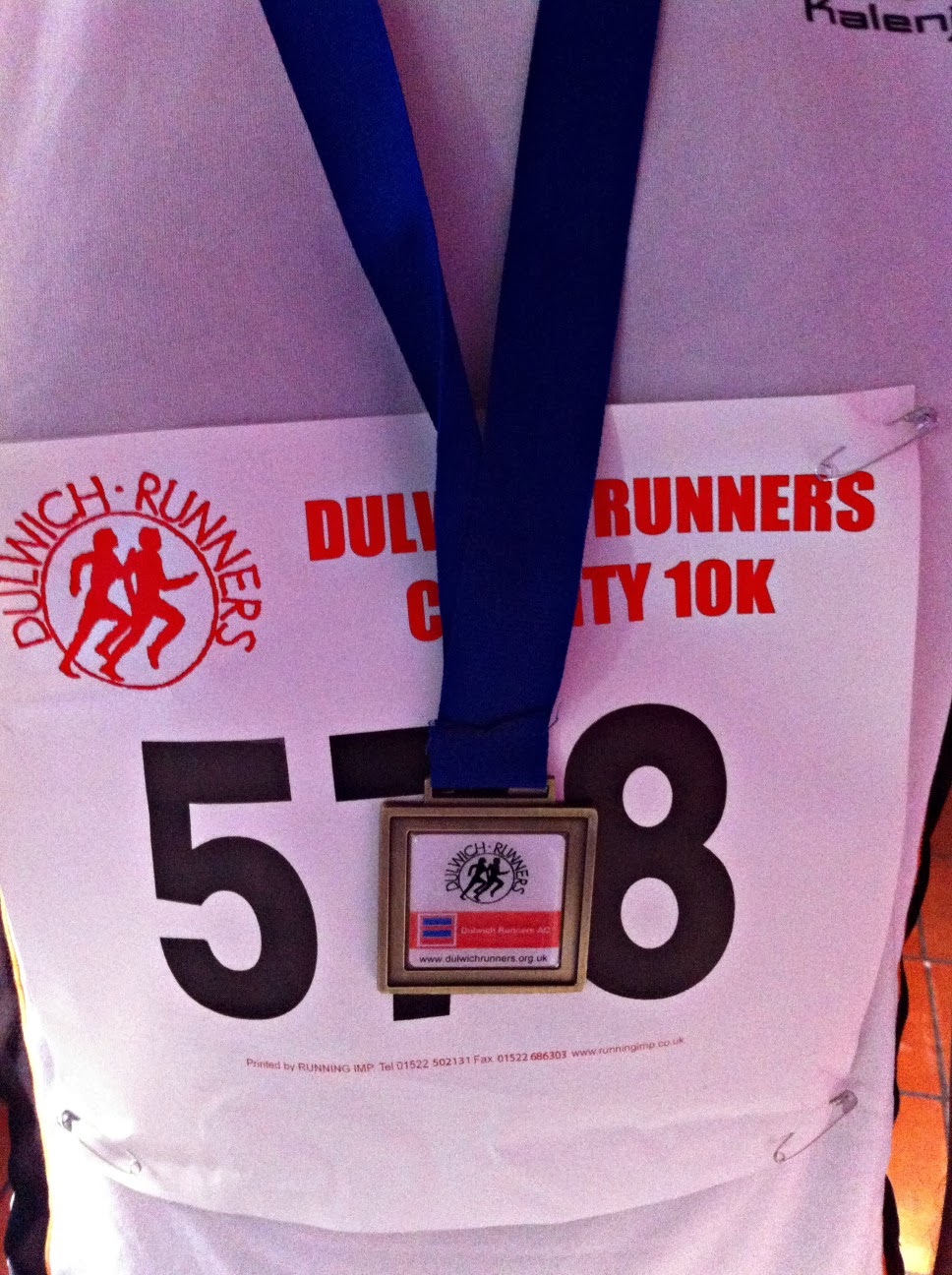