I got to meet two great athletes today, in fact I got to shake hands with the sometime world's fastest man.

Colin Jackson and Donovan Bailey were at Southwark Council's HQ in Tooley Street (London SE1) to promote an event taking place nearby in Southwark Park on Sunday 21st June. Sanlam Go Dad Run 'is a series of 5K runs for men and boys aged 11 and over to raise awareness of and funds for Prostate Cancer UK'. 5k runs have taken part in the last couple of weeks in Worcester, Bristol, Warrington and Llangefni, with the final two of this year's events taking place on Fathers Day in London (Southwark Park) and Cardiff this weekend (further details here). 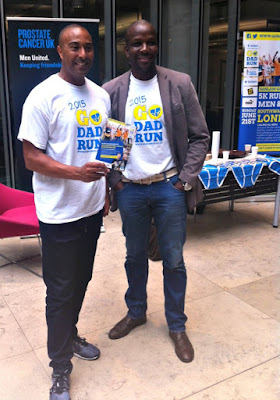 Colin Jackson, world champion and 1988 Olympic silver medallist in the 110m hurdles (and lately BBC athletics presenter), founded the project after the death of an uncle. He notes that 'whilst 1 in 8 men in the UK will develop prostate cancer, that actually rises to 1 in 4 men from an African Caribbean background'. Donovan Bailey, an Ambassador for Go Dad Run,  is a double Olympic and three-time World Champion and became the fastest man in history when he set a new world record of 9.84 seconds running for Canada in the 1996 Olympic 100m final. The pair also visited Globe Academy school in Southwark today. 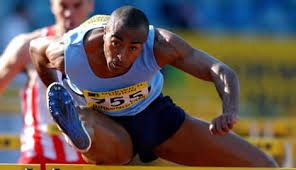 Jackson (above) and Bailey (below) in action 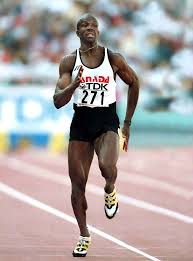