The mile race has an iconic status in the history of British athletics, brought up as many of us have been on the legend of Roger Bannister and the first sub-four minute mile in 1954. Not only that but the mile itself is woven into the English language in numerous idioms - 'saw it a mile away', 'go the extra mile', 'walk a mile in my shoes' etc. (though those who want to maintain that the mile is something distinctly British should note that its name derives from the Roman unit for a 1000 paces - mīlle passus or passuum).

As most of international athletics is based on metric distances, the mile race rarely features in major events, but it is going through something of a renaissance with two big London events launched in the last few years. The Westminster Mile started in 2013, and last year was joined by the new City of London Mile. 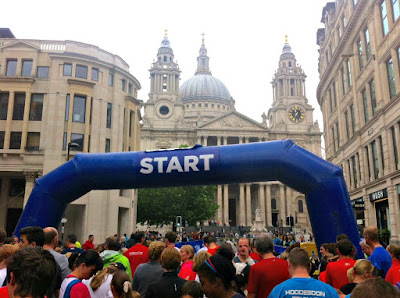 The second race of the latter took place today, in cool and slightly damp conditions (though the drizzle had more or less stopped by the time running started) . Really it was 16 races, including 12 waves plus a wheelchair race, youth race, and elite men's and women's races. The start and finish point were both in the vicinity of St Pauls Cathedral, with the course heading on roads past Mansion House and the Bank of England.

It was the first time I've run a mile race, of course if you're used to running longer distances it all goes by very quickly and you certainly don't have much time to make up for any delays or slow sections. The event, which was free thanks to sponsorship of Amba Hotels, was enjoyable and well organised (OK apart from the baggage pick up which was fairly chaotic - maybe a bigger tent next year?). 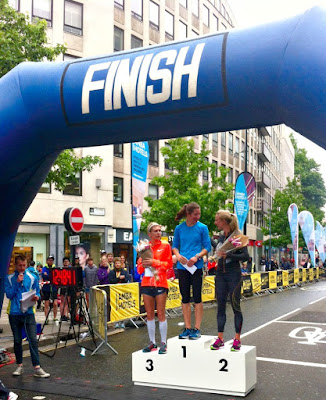 After my run I stayed to watch the elite races - in fact you can manage to see the start and then cut round the back of St Pauls to see the finish. Men's race was won by New Zealand's Julian Matthews, finishing his first road mile in 4:04, ahead of Australia's Collis Birmingham (4:05) and GB's Tom Lancashire (4:05). The women's race was won by Alison Leonard in 4:40, followed closely by Jemma Simpson (4:41) and Australia's Zoe Buckman (4:43). 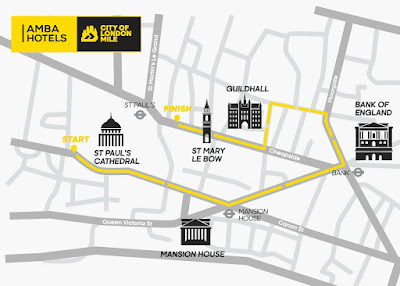 All in all, a great event - look out for next year's.