South of the Thames Cross Country 1903

Looking forward to the South of the Thames Senior Cross Country race at Beckenham Place Park this weekend. My club, Kent AC,  won this race last year for the first time since 1907.  The club were a dominant force in cross country at the time, thanks in particular to their star runner Albert Aldridge. He won the South of the Thames in 1902 and 1903, with the club finishing in second place on both occasions. Here's a report and some pictures from the 1903 race, which was won by Herne Hill Harriers. A few points to note: cross country at this time still featured the old hare and hounds paperchase method of marking the course, with trail layers running ahead and scattering slips of paper for the runners to follow; courses often had hurdles such as fences to overcome (in this race, one runner was reported to have been severely injured on such a hurdle); and one lesson that still applies - make sure you get there on time.

'THE SOUTH OF THE THAMES AT BROMLEY COMMON. VICTORY OF THE HERNE HILL HARRIERS' (Illustrated Sporting and Dramatic News,14 February 1903)

'The ill-fortune which proverbially follows the Kent Athletic Club, at Championship time, pursued them hotly on Saturday. Scarcely had the team men recovered from the shock of hearing that H. W. Churchman was in hospital awaiting an operation, than they found themselves minus another good man in R. E. Guest. He arrived on the scene, at Oakley Park. Bromley too late to compete. Then, when the 175 runners, representing fifteen clubs, were well on their way, H. Stent injured himself so severely on a hurdle that he collapsed completely.

Finally, the Kent A.C. lost the Championship by 22 points. Last year they lost by 1 point only. They had the satisfaction, however, in both years of supplying in A. Aldridge the first man home. He beat the big field a bit more than comfortably in 41 mins. 52 3/5 secs- good running for seven and a half miles of varied going, with obstacles en route. Next to Aldridge came the Reading runner, D. G. Harris, who did wonderfully well for a man thirty-one years of age. He cut out the work for F. James, of the Herne Hill Harriers, with such determination that the latter's finishing powers were rendered less dangerous than usual. James came in third, and easily beat the Eastbourne athlete and Sussex ex-Champion, B. Sewell.

Team honours went to the Herne Hill Harriers, who were similarly successful two years ago. They ran well on Saturday to win, as they did, with their second best man, J. S. Raynor, dropping out from exhaustion, brought on by running several miles from the wrong station, at which he had alighted. F. Appleby, who has relinquished athletics, for a time, in favour of study, and A. B. Starck, who is far from well, were also absentees. The leading clubs and their points were Herne Hill, 115; Kent, 137; Reading, 142; Eastbourne, 210; Epsom, 212; and Morden, 215. The forward running of P. A. Casserley, of the last-named club, was a great surprise'. 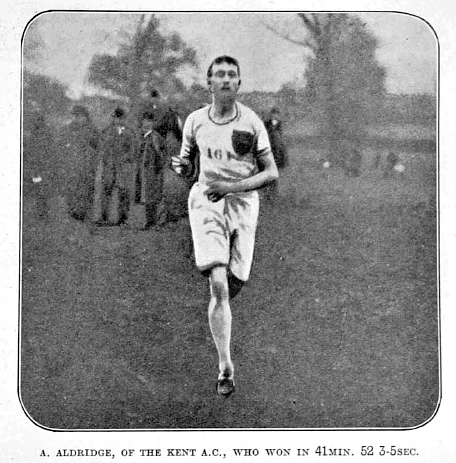