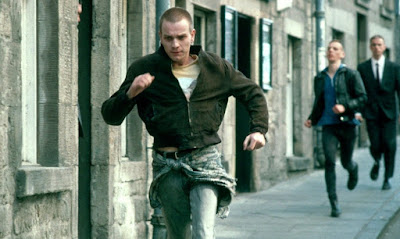 The opening scene of the original Trainspotting film (1996) famously features Renton (Ewan McGregor) and Spud (Ewen Bremner) running through the streets of Edinburgh being chased by store detectives, set to Iggy Pop's Lust for Life.

The follow up twenty years latter, T2 Trainspotting likewise starts with a run, but of a quite different kind. This time Renton is running on a treadmill in an Amsterdam gym before collapsing - his health shock prompting him to return to Edinburgh and  the heroin addict friends who he ripped off all those years before. 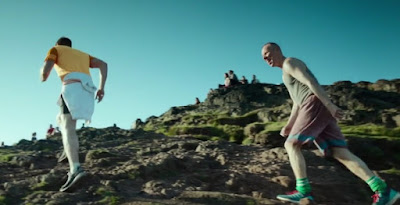 Finding Spud to be still struggling to kick the habit, Renton drags him out for a run to the top of Arthur's Seat in Edinburgh's Holyrood Park, the highest point in the city (this time soundtracked by Young Fathers' Low). 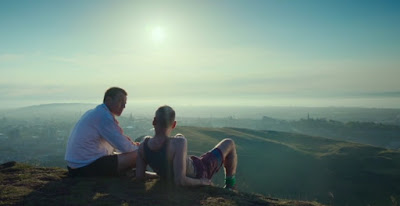 Sitting on top of the hill, they talk about addiction.

Renton: 'you are an addict... so  be addicted to something else'

Certainly not the first person, in fiction or real life, to take a lot more than 12 steps to recovery with the help of running.

Trainspotting author Irvine Welsh has done his share of running, including running London marathon twice, his first in London in 2001 I believe.

This week's Athletics Weekly notes that it is Jonny Lee Miller (Sick Boy) who is the strongest runner of the Trainspotting crew, dating back to his teenage years when he was 4th in the Surrey under 17 1500m champs in 1988. He has run many marathons including the 2008 London Marathon in 3:01.and New York 2013 in 3:19. He has also taken part in some ultras, including a 50 mile race through Bear Mountain, New York in 2015 for children's charity Jonah’s Just Begun. In fact in his twitter handle he describes himself as 'Professional pretender, ultrarunner, rare disease patient advocate, dad, ninja. But not in that order'.