Once a Runner - it's about time

'Once a runner' by John L Parker Jr is a novel first self-published by the author in 1978 and subsequently re-issued with some success in 2009, having established something of a cult reputation as a runners novel about running.

Set in the world of American college athletics - apparently at a fictionalised University of Florida - it inevitably reflects the period that it was written in. The Vietnam war is a reference point and there are battles between the students and the college authorities about the permitted length of hair for men. But much of the book is about the timeless, single-minded pursuit of success on the track at the elite end of athletics. 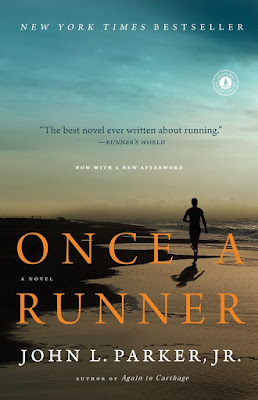 For me some of the more interesting passages are where the authtor reflects on how the runners' notion of time differs from the everyday world: he describes well the specific temporality of speed and endurance.

There is a cyclical time of seasons, of cross country and track, within a longer four year cycle of the Olympic games. But there is also an obsessive focus on the tiny passages of time that make the difference between winning and losing, between reaching or just missing a PB or record: "The Games were over for this time around. He knew quite well that for him they were over for good. Four years is a very long time in some circles; in actual time – real-world time, as that of shopkeepers, insurance sellers, compounders of interest, and so on – it is perhaps not long at all. But in his own mind Time reposed in peculiar receptacles; to him the passing of one minute took on all manner of rare meaning. A minute was one fourth of a four minute mile, a coffee spoon of his days and ways'.

Elsewhere he characterises the running world as a place where 'the jettisoning of but a single second is announced like a birth in the family'.

In some circumstances running seems to have a 'timewarp' dimension that stretches time: 'In the mind's special processes, a 10 mile run takes far longer than the 60 minutes reported by a grandfather clock. Such time, in fact, hardly exists at all in the real world; it is all out on the trail somewhere, and you only go back to it when you're out there'.

Waiting for the gun at the start of a race, there is 'that one instant there would be a kind of calm in the midst of all that pounding, roaring furor, a moment of serene calm before an unholy storm. There would be a single instant of near disbelief that it would finally be happening in a fraction of a second; finally happening after the months, the miles, the misty mornings'.

The main protaganist, Quenton Cassidy is 'not interested in the perspective of the fringe runners, the philosopher runners, the training rats; those who sat around reading abtruse and meaningless articles in Runners world, coining yet more phrases to describe the indescribable, waxing mystical over the various states of euphoria that the anointed were allegedly privy to... Cassidy sought no euphoric interludes. They came, when they did, quite naturally and he was content to enjoy them privately. He ran not for crypto- religious reasons, but to win races, to cover ground fast. Not only to be better than his fellows, but better than himself. To be faster by a 10th of a second, by an inch, by 2 feet or 2 yards, than he had been the week or year before. He sought to conquer the physical limitations placed upon him by a three-dimensional world (and if Time is the fourth dimension, that too was his province)'.

It is a life measured in episodes of minutes and seconds, as well as metres and miles, and wear and tear. As Cassidy also puts it : 'I have measured out my life in worn out rubber'.

Jack Kerouac running down a mountain
'These forms who hasten by' - runners on the Pilgrims Way, 1920s
'You just had to run' - Karl Ove Knausgaard
Morrissey - List of the Lost
Burns Night Running Thoughts
Running in the Railway Children
A Midsummer Night's Running
Running to Paradise - W B Yeats
The Sky of a Saturday Morning - John Updike
The Road is a Strange Country - Rebecca Solnit
The Runner - W H Auden
Louisa May Alcott - 'A Joy to Run'