Running on Screen (19): The Handmaid's Tale 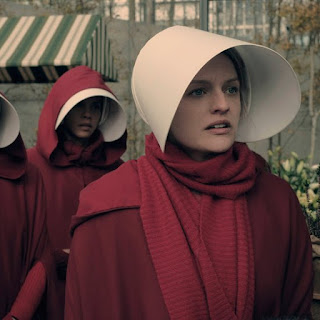 Episode 3 of The Handmaid's Tale (the excellent new TV adaption of Margaret Atwood's dystopian novel), features a scene with June, played by Elisabeth Moss, out for a run with her friend Moira, played by Samira Wiley. The soundtrack is Peaches' F*ck the Pain Away, expressing the kind of assertive women's subjectivity that is soon to be suppressed. The carefree freedom to run is remembered in flashback from a world where women's public presence is rigidly policed under a religious fundamentalist regime, and where fertile women live as slaves to breed children for their masters.﻿ 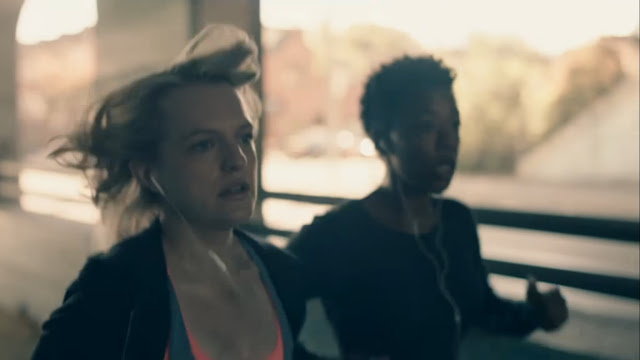 The point of this episode is to show the transition to the new repressive regime. The uncovered flesh of the runners receives a disapproving stare from a passer-by, and when the runners stop for a coffee afterwards they find that women's bank accounts have been frozen and women banned from the workplace as a menacing militia takes to the streets.


June - rechristened as Offred as she is now 'Of Fred', her commamder -  reflects: 'Now I'm awake to the world. I was asleep before. That's how we let it happen. When they slaughtered Congress, we didn't wake up. When they blamed terrorists and suspended the Consitution, we didn't wake up then, either. Nothing changes instantaneously. In a gradually heating bathtub, you'd be boiled to death before you knew it'.

The quote from Atwood's 1985 novel goes:

'Is that how we lived then? But we lived as usual. Everyone does, most of the time. Whatever is going on is as usual. Even this is as usual, now. We lived, as usual, by ignoring. Ignoring isn't the same as ignorance, you have to work at it.

Nothing changes instantaneously: in a gradually heating bathtub, you'd be boiled to death before you knew it. There were stories in the newspapers, of course, corpses in ditches or the woods, bludgeoned to death or mutilated, interfered with, as they used to say, but they were about other women, and the men who did such things were other men. None of them were the men we knew. The newspaper stories were like dreams to us, bad dreams dreamt by others. How awful, we would say, and they were, but they were awful without being believable. There were too melodramatic, they had a dimension that was not the dimension of our lives. We were the people who were not in the papers. We lived in the blank white spaces at the edges of print. It gave us more freedom.'


In the new world women must be covered up, and Offred recalls as she walks 'I'm remembering my feet on the sidewalks, in the time before, and what I used to wear on them. Sometimes it was shoes for running, with cushioned soles and breathing holes, and stars of fluorescent fabric that reflected light in the darkness'.