Louisa May Alcott: 'A Joy to Run'

The latest adaption of Louisa May Alcott's  868 novel 'Little Women', directed by Greta Gerwig, was released in December 2019. An early scene features Saoirse Ronan (playing Jo March) dashing through the streets of New York - possibly a nod to Gerwig's own running scene in Frances Ha.  That's as far that's as far as it goes in terms of running content in this film. But did you know that Alcott herself was a keen runner from childhood, long before women's athletics let alone running clothes! 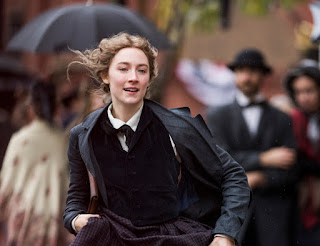 Alcott (1832-88_ was an early feminist who grew up in a milieu that included the writers Ralph Waldo Emerson and Henry Thoreau, famous for their romantic celebrations of nature.  In one of her memoirs, 'Sketch of Childhood, by herself', Alcott wrote: 'Active exercise was my delight, from the time when a child of six I drove my hoop round the Common without stopping, to the days when I did my twenty miles in five hours and went to a party in the evening. I always thought I must have been a deer or a horse in some former state, because it was such a joy to run. No boy could be my friend till I had beaten him in a race, and no girl if she refused to climb trees, leap fences, and be a tomboy. My wise mother, anxious to give me a strong body to support a lively brain, turned me loose in the country and let me run wild, learning of Nature what no books can teach, and being led, — as those who truly love her seldom fail to be — through Nature up to Nature's God.

I remember running over the hills just at dawn one summer morning, and pausing to rest in the silent woods, saw, through an arch of trees, the sun rise over river, hill, and wide green meadows as I never saw it before. Something born of the lovely hour, a happy mood, and the unfolding aspirations of a child's soul seemed to bring me very near to God; and in the hush of that morning hour I always felt that I "got religion," as the phrase goes. A new and vital sense of His presence, tender and sustaining as a father's arms, came to me then, never to change through forty years of life's vicissitudes, but to grow stronger for the sharp discipline of poverty and pain, sorrow and success' (now that's what I call a runner's high!).

This moment was recorded in her diary at the time, when she was living in the family home at Concord, Massachusetts (where Little Women is set): 'I had an early run in the woods before the dew was off the grass. The moss was like velvet, and as I ran under the arches of yellow and red leaves I sang for joy, my heart was so bright and the world so beautiful. I stopped at the end of the walk and saw the sunshine out over the wide Virginia meadows. It seemed like going through a dark life or grave into heaven beyond. A very strange and solemn feeling came over me as I stood there, with no sound but the rustle of the pines, no one near me, and the sun so glorious, as for me alone. It seemed as if I felt God as I never did before, and I prayed in my heart that I might keep that happy sense of nearness all my life'.

This spiritual experience was inspired by running in the wild but was also influenced by her family's Transcendentalist beliefs (shared by Emerson and Thoreau)  which saw goodness and the divine in humans and nature, rather than in institutionalised religion.

Alcott continued to run as an adult, with her running a part of her writing routine. Staying in Walpole, New Hampshire in June 1855 she wrote 'Pleasant journey and a kind welcome. Lovely place, high among the hills. So glad to run and skip in the woods and up the splendid ravine. Up at five, and had a lovely run in the ravine, seeing the woods wake. Planned a little tale which ought to be fresh and true, as it came at that hour and place'. In February 1861 she recorded that 'From the 2nd to the 25th I sat writing, with a run at dusk' while working on her novel 'Moods', published in 1864. Later while writing Little Women she noted 'Finished my thirteenth chapter. I am so full of my work, I can't stop to eat or sleep, or for anything but a daily run'.

Alcott was a committed slavery abolitionist and during the American Civil War she served as a nurse in the Union Hospital at Georgetown, D.C. for a short period in 1862 before becoming seriously ill with typhoid. Even here she seems to have found time for running: 'My work is changed to night watching, or half night and half day — from twelve to twelve. I like it, as it leaves me time for a morning run, which is what I need to keep well; for bad air, food, and water, work and watching, are getting to be too much for me. I trot up and down the streets in all directions, sometimes to the Heights, then half way to Washington, again to the hill, over which the long trains of army wagons are constantly vanishing and ambulances appearing. That way the fighting lies, and I long to follow'.

It's not clear whether Alcott's running was seen as idiosyncratic or whether, at least in her progressive sub culture, it was commonplace for women.

Little Women itself features an episode where Jo runs down hill to the disapproval of her sister Meg:

'"Race down this hill with me, and you'll be all right," suggested Laurie.

No one was in sight, the smooth road sloped invitingly before her, and finding the temptation irresistible, Jo darted away, soon leaving hat and comb behind her and scattering hairpins as she ran. Laurie reached the goal first and was quite satisfied with the success of his treatment, for his Atlanta came panting up with flying hair, bright eyes, ruddy cheeks, and no signs of dissatisfaction in her face.

"I wish I was a horse, then I could run for miles in this splendid air, and not lose my breath.  It was capital, but see what a guy it's made me.  Go, pick up my things, like a cherub, as you are," said Jo, dropping down under a maple tree, which was carpeting the bank with crimson leaves. Laurie leisurely departed to recover the lost property, and Jo bundled up her braids, hoping no one would pass by till she was tidy again. But someone did pass, and who should it be but Meg, looking particularly ladylike in her state and festival suit, for she had been making calls.

"What in the world are you doing here?" she asked, regarding her disheveled sister with well-bred surprise.

"Getting leaves," meekly answered Jo, sorting the rosy handful she had just swept up.

"And hairpins," added Laurie, throwing half a dozen into Jo's lap. "They grow on this road, Meg, so do combs and brown straw hats."

"You have been running, Jo.  How could you?  When will you stop such romping ways?" said Meg reprovingly, as she settled her cuffs and smoothed her hair, with which the wind had taken liberties.

"Never till I'm stiff and old and have to use a crutch.  Don't try to make me grow up before my time, Meg.  It's hard enough to have you change all of a sudden.  Let me be a little girl as long as I can."'

In the sequel to Little Women, Little Men - where Jo is running a school - one of the characters, the tomboyish Nan, also enjoys running:

'“I can beat you in running, any way,” returned Nan, falling back on her strong point.
“Can she?” asked Nat of Jack.
“She runs very well for a girl,” answered Jack, who looked down upon Nan with condescending approval.
Will you try?” said Nan, longing to display her powers.
“It’s too hot,” and Tommy languished against the wall as if quite exhausted'.

All quotes, other than extracts above from Little Women and Little Women,  from Louisa May Alcott; her life, letters, and journals.

Jack Kerouac running down a mountain
'These forms who hasten by' - runners on the Pilgrims Way, 1920s
'You just had to run' - Karl Ove Knausgaard
Morrissey - List of the Lost
Burns Night Running Thoughts
Running in the Railway Children
A Midsummer Night's Running
Running to Paradise - W B Yeats
The Sky of a Saturday Morning - John Updike
The Road is a Strange Country - Rebecca Solnit
The Runner - W H Auden
Once a Runner - John L Parker jr