Good to see some great performances and a sell out crowd at the Olympic Stadium for the Anniversary Games/Diamond League Athletics, which as Brendan Foster noted may have been the largest ever crowd for an Athletics event in the UK outside of Olympic events (at the 1948 Olympics, Wembley held 85,000 compared with 60,000 last night).

No harm in a bit of wallowing in nostalgia for last year's Olympics either, but it was interesting to hear some of the inflated rhetoric about the Games legacy being punctured by a discussion about coaching in a BBC studio discussion last night involving Gabby Logan, Kelly Holmes, Denise Lewis, and Paula Radcliffe (pictured below, left to right). 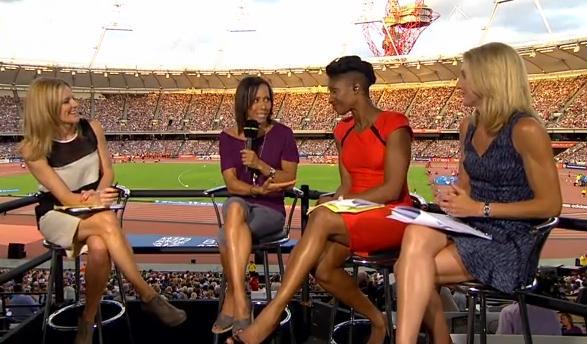 Lewis was most outspoken, saying: 'within athletic clubs we are seeing diminishing numbers in coaching and we need to find that incentive and keep them there. And yes the Olympics has its place but lets face it people do need to be incentivised. Its time that there was a better payment structure for coaches that are spending vast amount of hours on the track'. Paula Radcliffe agreed: 'they are the gatekeepers of the sport... and they need to be rewarded'.

Similar comments were made in Sarah Shepherd's interview this week in Sport magazine with Jessica Ennis-Hill's Sheffield coach Toni Minichello. He was paid by British Athletics in lead up to the Olympics before in effect being made redundant and now says:

“Here in Sheffield, the number of youngsters getting involved in the sport has quadrupled... We’ve gone from about 200 people involved in kids’ academies here to 700, plus a small waiting list. The Olympics was a massive stimulus... We do not have enough coaches and we don’t have a professionalism of coaches. There’s always an overreliance on volunteers. I was employed for a while and am now – strictly speaking – a volunteer too. But there’s a limit to what volunteers can do. There should have been a move towards the professionalisation of coaching so that people could actually earn a living from it, or develop a career. There should also have been more of an emphasis on recruiting coaches before the Olympics, so that we could cope with this. These are the same problems we had after we won the Rugby World Cup in 2003 and the Ashes in 2005 – you just couldn’t cope with the influx afterwards. So the lessons were there, but they hadn’t been learned.”

'The man named UK Coach of the Year for overseeing Ennis-Hill’s rise to the top chuckles when asked whether the people with the power to act on his suggestions have ever asked for his views on how to secure a legacy from London 2012: “I’m the son of immigrant workers up north – what do I know? I get no kudos stood next to a minister, but if I’m Jessica Ennis, then I do. What happens in sport is that, politically, they’re obsessed with celebrity. So they’ll ask the people who perform what should happen – never the people behind them.”
Posted by Transpontine at 11:28