The SOAR Mile 2018, held on Friday 27th July, was a great event with more than 200 runners taking part in 12 races at the London Marathon Community Track in Olympic Park.  After several weeks of relentless sunshine, the weather burst just before the event began with a big wet thunderstorm but the rain and the air had cleared by the time the races started, making for much improved running conditions.

As with other events such as Night of 10,000m PBs, the Milton Keynes MK 5000 PB Special, the Orion Harriers' FAST Friday races and the Kent AC 10,000m, this is part of a move in grassroots athletics to put on exciting events with a dusting of razmattazz alongside top quality racing. In this case the venue was adjacent to the iconic former Olympic stadium which added to the sense of occasion, and there was free beer! 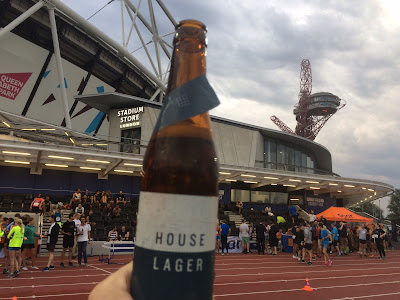 As with some of the events mentioned above, spectators were encouraged to stand on the track and cheer from the outside lanes, here in lane three. This does make for a good atmosphere, my only suggestion for next year would be to maybe pull people back a lane to leave three lanes completely clear. In one of the races I watched people in lane three began to lean and step into lane two making it difficult to overtake in the closing stretch.

Hannah Viner (Highgate Harriers) was the fastest woman on the night, winning the £150 cash prize for her 4:47 mile.  The elite men's race was won by Dale King-Clutterbuck (Newham & Essex Beagles) in 4:05:37. He has gone under 4 minutes before,  but the windy conditions on the night probably cost him a few seconds.

I ran in one of the earlier races. I was in two minds about taking part as I haven't been running much recently let alone racing (insert tedious achilles injury excuses), but really didn't want to miss the event as I hadn't run this distance on track before. Ended up with 6:02, so slightly annoyed for not pushing a little harder in middle of race as I have run faster on the road. 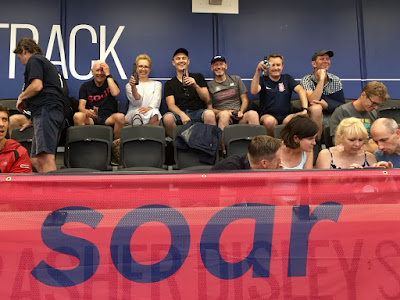