The story of this episode is told in the book 'The first 50 years of the Catford Cycling Club' by E.J. Southcott, published in 1939. 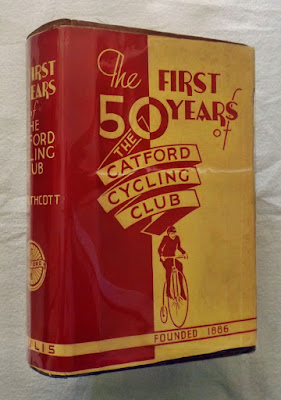 A key driver of the formation of the cycling club was Charles Percival Sisley, an 18 year old who lived with his parents in Morley Road, Lewisham. He had been been a member of a small local club, Mount Pleasant Cycling Club, based around Mount Pleasant Road in Lewisham.

His plan to create a wider Catford Cycling Club was not universally popular. The Brockley BC complained that 'there were enough clubs already in the SE of London' (there were also Lewisham and Sydenham clubs). But Sisley's plans did find support from 'an athletic club called the Lewisham Hare and Hounds' which 'was also considering the formation of a cycling club'. The club's secretary Ernest G. Brabrook talked to Sisley and the outcome was the inaugural meeting of the cycling club at the Hither Green Hall - HQ of Lewisham Hare and Hounds - on 12 April 1886. 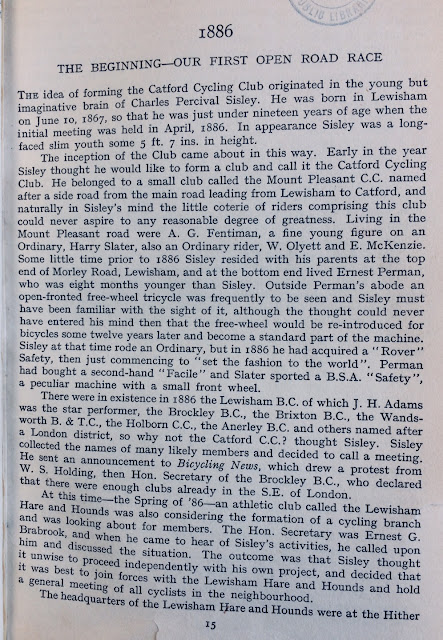 In the Chair was the Reverend W. Hook Longsdon, a keen cyclist, goalkeeper for Colfe’s Grammar School's football team and later curate at St. Mary’s Lewisham.  The meeting agreed a set of rules and that 'All Club runs shall start from the Black Horse, Catford'. The club's first inter-club race in June 1887 was with St Peters Bicycle Club and headed to the ''Salt Box' at Cudham, a popular resort for cyclists for many a year'. 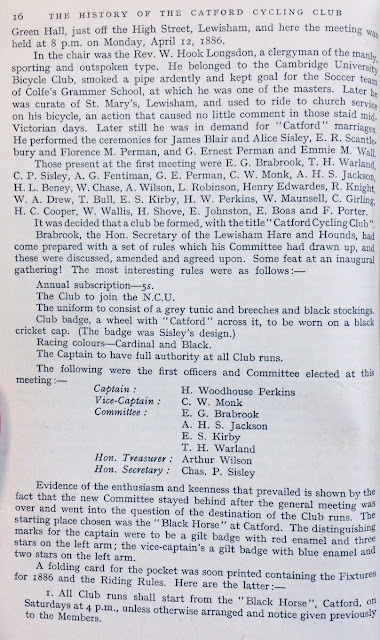 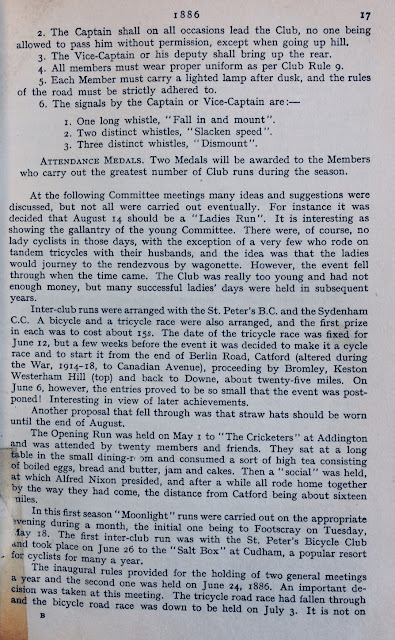 Geraldine Biddle-Perry has explored the history of CCC  further in an excellent article in The London Journal,  Fashioning Suburban Aspiration:Awheel with the Catford Cycling Club,1886–1900 (Vol. 39 No. 3, November, 2014, 187–204).

The author has made good use of material held in Lewisham archives to analyse the membership of the cycling club: 'Using Cross-referencing CCC membership lists between 1886 and 1900 with 1891 Census data reveal a social constituency drawn from a cross-section of middle- and lower-middle-class British suburban society at the turn of the twentieth century. Members were predominantly unmarried young men in their late teens and twenties living with their parents (or boarding) in larger villas and neat terraced houses, sometimes in the same roads in Lewisham, or in neighbouring South London boroughs. Most members were employed as mercantile, commercial and stockbrokers’ clerks, but there are also draughtsmen, commercial artists, travellers and agents, managers, journalists and engineers'. I would imagine that the associated athletic club had a similar membership.

While membership was not explicitly socially exclusive, there were financial barriers to joining it, including the cost of the club's uniform 'consisting of a grey check tunic and breeches in a cloth... this could be made by Messrs Clare & Son, of French Street London, priced at 42/- with an extra 2/- for the addition of a fleece lining.The suit would be worn with black stockings and a black cricket cap adorned with the Club badge (a wheel with the word ‘Catford’ inscribed across it)'.

CCC was ambitious to be much more than just a local club and to make its wider mark in the world of cycling: 'in its first season Catford held the first ‘open’ public road race—over 25 miles on a circuitous route (kept secret until the start of the event) around the adjacent Kentish countryside—a practice the National Cyclist Union described as ‘illegal, illegal as prize-fighting, cocking or any other tabooed sport’'. While the cycling world, like the Athletics world, agonised about the vagaries of amateurism, CCC members made  their living from the sport in various ways. Club founder Sisley became editor of the popular  magazine 'Cycling', while another member, 'T.C. Pullinger started a small manufacturing workshop in New Cross producing his own version of the new safety bicycle, ‘The Parade’. Other members belonging to the Argus Bicycle Club in neighbouring Brockley included a cycle salesman for Stanley bicycles, a self-employed cycle manufacturer producing their own machine ‘The Austen’, a cycle engineer and repairer, as well as a tailor and outfitter selling ‘Cycling, Cricketing and Tennis Suits made to order’.

In 1894/95, the club - nicknamed the Kittens- was involved in the development of the first cycling track with banking in England. The Catford stadium also hosted athletics events before it was sold off to property developers in 1900 (see details at Running Past)

CCC is still going strong today, though focusing on the Bromley and Sevenoaks area rather than its former Lewisham heartland.