Morrissey's 450+ page 'Autobiography' has a few surprizes, but the biggest revelation for me was his apparent prowess as a teenage athlete. In between seeing Mott the Hoople, David Bowie and Lou Reed, the young Stephen Patrick won medals running in the 100m and 400m for St Mary's Secondary Modern School in Manchester - although given his otherwise miserable time at the school he quips that 'I was actually running from St Mary's'. 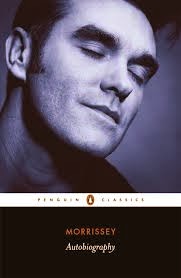 Morrissey reminisces: 'my Saturdays are marked out by solitary excursions to woe-begone stadiums in child-gorging Gorton or dishearteningly dented Denton. I am obliged to make my own way, and I am obliged to feel honored and to dream of the 14-second dash, or the one-minute 400... Frozen amongst the pugilistic roughnecks whose kits don't fit, I await the starting pistol, always relieved to let loose on a grey granite track with its wet chalky smells'.

Unfortunately Morrissey doesn't throw any light in his book on his encounter with fellow indie athlete Billy MacKenzie of the Associates, other than confirming that they met.

In recent years it has been Morrissey's former songwriting partner in The Smiths who has been making all the running. Johnny Marr ran a  credible sub-4 hours time in the 2010 New York City Marathon 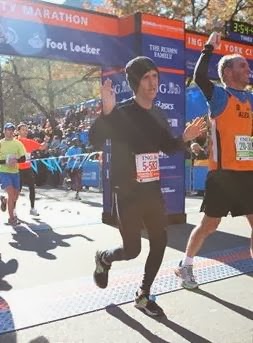 As I mentioned before, The Smiths' 'Is it really so strange' does include a lyric pertinent to running.

Update 12 March 2014:  Johnny Marr is still running, and broke his hand last week after taking a tumble and has had to cancelsome gigs as a result-  'The guitarist and singer fell while he was out running in London last week, and now has his hand in plaster (see picture above).In a statement issued to NME, Marr said: "I was running pretty fast and just went straight over. I banged my shoulder and then realised my hand was in a bad way. Obviously we’re hoping there’s no long term damage."


Update, 27 September 2014:  Johnny Marr interviewed by John Harris in The Guardian: 'What now assists his frantic work rate, it seems, is an exacting exercise regimen, built around at least four long-distance runs each week. “When I go out, I do 10 miles. If I’ve got decent time between a soundcheck and a gig, I’ll do 15, sometimes 18. I try and time my run so I finish 20 minutes before a gig, and I’m hopping around.”
Posted by Unknown at 23:12