The Isle of Islay, if you don't know it, is the southernmost of the Hebrides islands in Scotland. My dad came from there, so I have been going there regularly since I was a baby. It is most famous for its whisky (with eight distilleries currently in operation, and two more planned to open) and for its bird life. It is also a good place for walking and running. Unfortunately my holiday on Islay this year narrowly misses the Islay Half Marathon, which has been happening since 1986 and takes place this year on Saturday 2 August. But I have managed to get in some good runs in which I will share here. 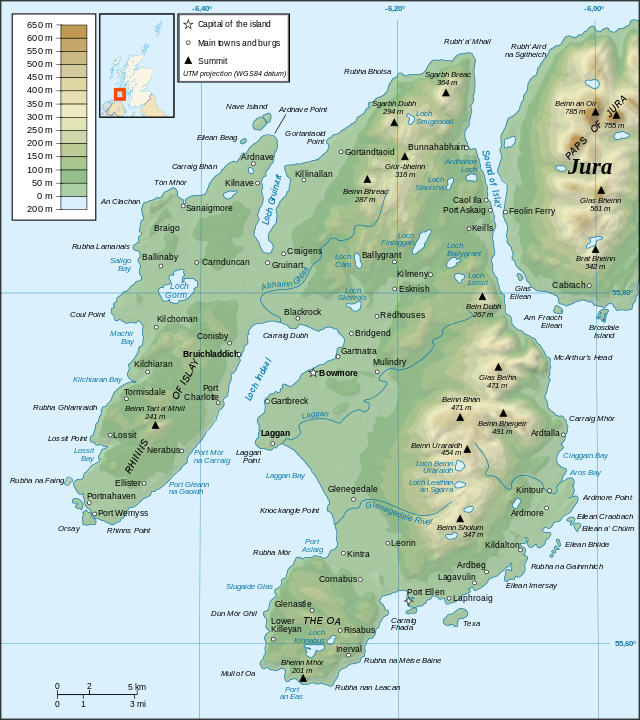 There's not a lot written about running on Islay, but there's plenty on walking including a couple of free 'Explore Islay' leaflets with details and basic maps of walks which you can pick up from the Tourist Information centre in Bowmore. There are also maps and books available, best place to go is The Celtic House/Roy's in Bowmore which has pretty much everything in print on Islay. So a starting point for running is to follow the walking routes and move a bit quicker!

Just a few safety points which apply to runners as well as walkers:

- if you are running on the roads, many are single lane. There is often a limited verge - suitable for standing on but not always for running on. So be aware of vehicles (including some big lorries), they may not have room to pass you on the road and you might need to step on the verge. Don't listen to music, listen out for traffic, and in the long quiet periods between vehicles, listen to the birds!

- if you are running off road, be aware that the terrain can be unpredictable. What looks on the map like a short, straightforward cross country trail can end up in boggy ground, hitting a fence and surrounded by head high bracken. It can be disorientating, especially when you realize that you have no phone signal either. I have got lost in the hills before - low point was stumbling across a dead cow in the path. So be cautious, if you are running in a remote area take a map and compass.

- the weather too is unpredictable. You can head out in sunshine and then see a cloud of rain coming towards you. On a more positive note, a quick shower may be followed by a burst of sun to dry you out!

The first run is around Bridgend Woods. At some point in the distant past, Islay would have been covered in trees, but today there is only limited woodland. One of the most substantial areas of woodland is around the River Sorn near Bridgend, where many trees were planted as part a desgined landscape in the early 19th century linked to the nearby Islay House - then the home of the  island's principal landowners.

If you are driving/cycling, park in the car park next to the Spar shop (the only shop) in Bridgend. If you want to add 3 miles to the run, start in Bowmore and run along the road to Bridgend. Opposite the car park, start the run by following the track to the right of the memorial:

As you go up this track into the woods, the path splits. I took the right hand fork, marked 'Claggan Strip', a narrow strip of woodland that joins the main body of the woods further up (if you want a shorter, simple, mud-free run you could take the left fork and follow main track).


Keep to this path, it is fairly easy to follow through the woods.

The path can get muddy/boggy in places when it has been wet. Tread carefully and tie your laces tight - I had the full 'shoe came off in the mud' scenario.

Keep straight on, including climbing over/opening a gate. Eventually the track comes to an end at a T-junction, with a sign pointing back where you came from marked 'Bridgend'. Turn right and you soon come to another junction (pictured below) where the trail forks. Take the left hand fork, marked 'Waulk Mill'.

Run up a long, fairly gentle uphill slope. Towards the top, on the left, a sign points to 'waulk mill'. As you run down this narrow path you will see that you are above and descending towards the Islay Woollen Mill (on the road between Port Askaig and Bridgend).

I stopped on the bridge over the River Sorn, which has been powering the mill on and off since 1883.


From there you can then retrace your steps up the path that you came down or you can go up the broader path next to it:

These two paths soon join at the top of the slope either way and then you are running back down the broad path you ran up previously. When you come to the junction (picture 5 above), turn right, run straight on past the Bridgend sign at the  next T-junction and instead of turning left and going back the same way you came, go straight on towards this bridge and cross it.


After the bridge keep straight on that track, the river and a field beyond it on your left for most of the route though not always visible. Eventually you will see another bridge on your left, cross it.

On the other side of the bridge, turn right. You will be tempted, as I was, to take the path on the riverbank. It has great views, but runs out after a few hundred metres so you then have to run back towards the bridge. To save yourself this trouble take the next, more worn path to the left (to the left of the big tree behind the bench below)

You will soon come back to the original junction (picture 2 above), a short run to your right and you're back where you started. Obviously there are many other possible routes through the woods, but this worked for me as a 6.5k run and I didn't get too lost despite having to double back on myself a couple of times. 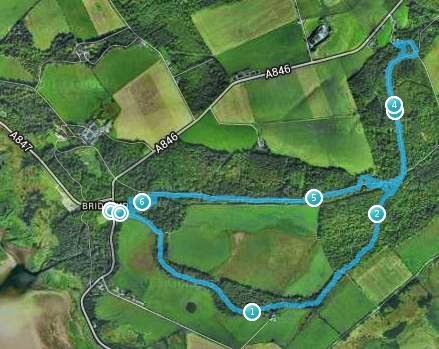