52 teams of three took part in the Dulwich Runners Midsummer Relays on July 12th 2017, held for the second year in Dulwich Park. In previous years the club organised a midsummer 5k - I ran it in 2015 (see report here) - but with the park hosting a 5k parkrun every Saturday it makes sense to try something a bit different.

This year I ran with people from work who I sometimes join for a Wednesday lunchtime run around the Tower Bridge area. We fielded two teams as 'Tooley Street Runners', each of us taking our turn at one lap of the park - just over a mile.﻿

Finsbury Flyers were the winning men's trio in 14:52, and a team from London City Athletic Club won the women's competiion in 17:43. The mixed team prize was won by three Peckham parkrunners in 16:34. Full results here. 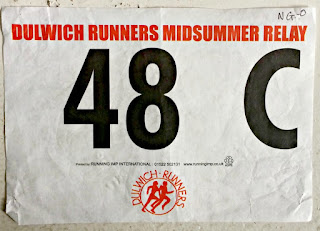