The inaugural Catford parkrun took place in Mountsfield Park this morning, with just over 200 runners taking part. Joe Hartley (Kent AC) set the men's course record of 17:43, no doubt he could go faster when he's properly over the London Marathon where he ran a 2:41 PB. Vicky Boyle set the women's course record of 21:26.

It's an interesting course, undulating rather than hilly, with a psychological plus point that it feels like there's more down hill than up. Unlike many London parkruns much of it is on grass/trail rather than tarmac and with my ongoing achilles issues I certainly welcomed the softer surfaces. My run was slow and a bit sore, but hey I am currently the V55 course record holder with 23:45! Yes this time last year I could still occasionally manage a sub-20 5k, whether I will get back to that or nor I've accepted that it is a privilege just to be able to keep running. 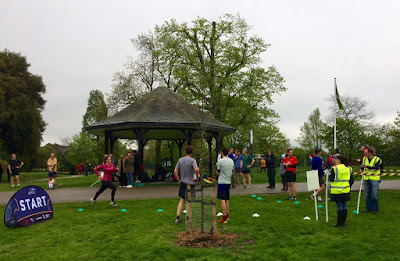 The start and finish points are by the park's bandstand, and the three lap course also features a circuit of a field in park that has the distinction of briefly being  the home of Charlton Athletic FC in the 1920s as well as the long defunct Catford Southend FC (see more at Running Past on this). 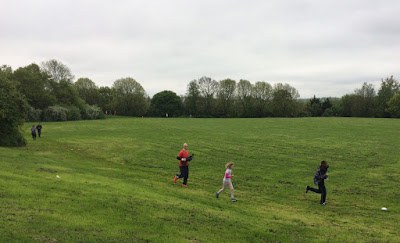 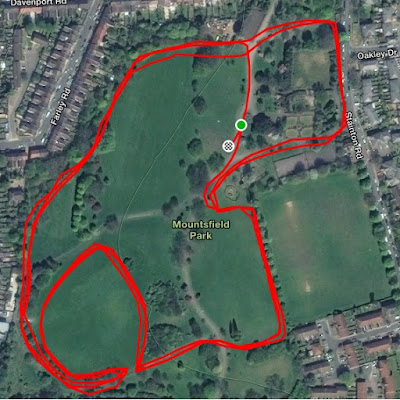 This is the third parkrun in a Lewisham park, the others being at Beckenham Place and at Hilly Fields, my home parkrun. I went along there last week for its 300th event. As it was also the day before the London Marathon there were a lot of tourists in town, so Hilly Fields had its second largest ever attendance of 341. As numbers grow, the new Catford event should take some of the pressure off it.