Running in Another Direction: Northern Soul & Running as the new Raving

Paul Mason's excellent BBC documentary 'Northern Soul - Keep the Faith', first broadcast last week, examines its continuing appeal forty years after the first Northern Soul all-nighter at the legendary Wigan Casino. Catch it if you can, if not read his recent article for Vice magazine which explores similar territory:

'Even without speed you were able to experience the massive euphoria that was the defining atmosphere about an allnighter. I am convinced it was the product of the collective empathy that took place on the dancefloor, and not just the drugs. You could feel it kicking in outside before the Casino opened, in the two hours after midnight: people became tense, elated, subconsciously connected.

I might be the only person who’s experienced both Wigan and, say the Taksim Square occupation in Istanbul this year, so this is hard to verify: but I think these very different atmospheres shared something in common. There was something overtly rebellious and subconsciously political about Wigan. Like with a riot, or an occupation, you could tell immediately, through eye contact, who was feeling the buzz.

What we were doing, back then, was rewriting the rules of being white and working class. We knew exactly what it meant to dance to black music in the era of the National Front and the racist standup comedian. Ours was a rebellion against pub culture, shit music and leery sexist nightclubs. Our weapon was obscure vinyl, made by black kids nobody had ever heard of'. 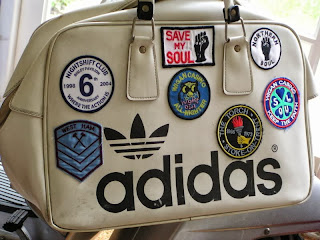 So what's all this go to do with running? Well one thing that I've been thinking about recently is whether there is a link between the popularity of running amongst people past their clubbing peak and the popularity of dance music when these same people were younger. Marcus Ryder (Sound of Running) has recently suggested that for some of us running shops are the new record shops - well, maybe in the same way running is the new raving.

I recently found that I had crossed paths with another blogger, Run Don't Run, on South London dancefloors in the late 1980s. I'm sure he's not the only one. By definition a large proportion of the 35-55 generation were dancers, as their (our) youth coincided variously with Northern Soul, Disco, Funk, Acid House, Rave, Techno etc.

But I think the connection goes deeper. Running reconnects us with a sense of our bodies in motion, just like dancing. Not just in isolation but as part of a collective. There's also the endurance aspect, pushing ourselves beyond our normal boundaries and coming out the other side buzzing with endorphins - whether as a result of staying up all night dancing or running that extra mile.

Northern Soul specifically was very athletic from the start - Fran Franklin speculates in Paul Mason's film that some of the dance moves might have been influenced by the popularity of Bruce Lee's kung fu movies in the early 1970s. It also pioneered British youth culture's fascination with sports wear - Adidas was mostly associated with continental football teams like Bayern Munich before soul boys and girls started using Adidas bags to carry their gear to Wigan and wearing Adidas t-shirts.

Despite loving the music and checking out some Northern Soul clubs over the years, I was too young for its heyday. But its template certainly followed through to the clubs and raves of the 1980s and 1990s which were more my period. In Paul Mason's programme, Elaine Constantine (director of the soon to be released 'Northern Soul' movie) makes the running comparison explicit:

'every single person is going through every beat of that record with you, and you know that when you do that [makes clap sound] it's all going to happen at that moment... it's almost like you're all running the same race together'.

And yes I still pack talcum powder in my bag when I go out... to stop chafing on long distance runs rather than to sprinkle on the dancefloor though! 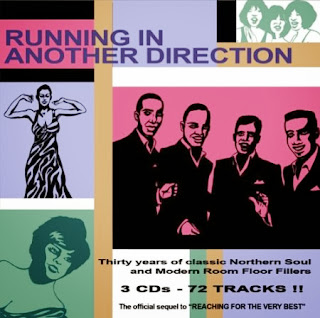 On BBC I-Player until Wednesday