The Art of Athletics (3): Jindřich Heisler

Jindřich Heisler (1914-1953) was a Czech surrealist poet and artist. Half Jewish, he hid out out at a friends' apartments in Prague for much of the 1940s Nazi occupation to avoid deportation to the death camps. During this time he produced a diverse body of work in very challenging circumstances - interestingly a couple of the images he produced feature running figures. As he was rarely able to go outside I wonder whether for him the runner represented freedom and/or his condition as a man on the run. 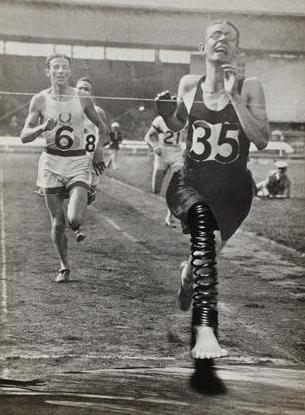 In this untitled work from c. 1943,  Heisler has attached a spring/toy foot to a photograph of an athlete  - making a kind of prosthetic leg.
Posted by Neil Gordon-Orr at 06:00