In this spot a few weeks ago we featured Lilian Board, who died a tragically early death in 1970 after winning a medal in the Mexico 1968 Olympics. One of Lilian's team mates in Mexico was Anita Neil - they ran together in the  4 x 100m team in Mexico.

As a young athlete in 1966, Neil was painted by Hubert William Pack (1926-1995). The oil painting is simply entitled 'Miss Anita Neil (b.1950)' and is in the collection of  Wellingborough Museum 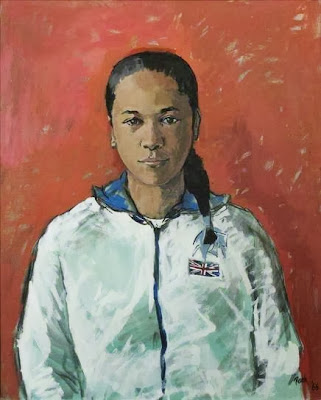 Anita Neil first competed for Great Britain as a 16-year-old long jumper in a competition with France in 1966 (Times 19 September 1966), but it was as a sprinter that she really made her mark.

She competed for Great Britain in Munich 1972 as well as in Mexico 1968, running in both Olympics in the Women's 100m and the 4 x 100m relay. In 1969 she won a bronze medal in the 100m at the European Championships and at the following year's Commonwealth games she won a silver in the 4 x 100m relay.

In 2012, she was guest of honour at the opening of an Olympics exhibition at Wellingborough Museum. The local paper reported her comment that she was 'the only Wellingborough person from the town to represent their country in athletics at the games'. But I wonder whether she also had a wider significance - was she Britain's first black woman Olympic athlete? I am happy to be corrected, but have found no record of any earlier.

Her ethnicity may not have been a big deal in her career, but she was referred to in the Times as one of  two 'coloured British athletes' (the other being Verona Bernard) who declined an invitiation to take part in a competition in South Africa in 1971.


There's some pathe footage of the 1972 Portsmouth race here.