Save Crystal Palace for athletics... and popular culture

The campaign to save sports provision in Crystal Palace park at the National Sports Centre is continuing. As reported here in November, a short consultation was launched on behalf of the Mayor of London on proposals which would radically reduce facilities at what was until recently the home of English athletics: the outdoor running track, indoor track, and diving in the swimming pool are among the things at risk.

There has been a big public response, including widespread support for keeping the running tracks. Even though many reluctantly concede that the full scale stadium is no longer needed in the same way since the building of the Olympic stadium in Stratford, a good case has been made that some kind of stand for spectators should be retained with the track - rather than just shared use of a school running track with no other facilities, which is one possibility. Follow campaign updates at Crystal Palace Sports Partnership.

While the loss of running and other sports facilities would of course primarily be a tragedy for athletes young and old, lets not forget that the National Sports Centre is also an icon of popular culture!  Famously the 'You were only supposed to blow the bloody doors off!' scene in the Italian Job was filmed there.

Recently Danish electro-pop artist MØ (Karen Marie Ørsted) filmed the video for her song 'Walk This Way' at the stadium.  Here she is on the outdoor track... 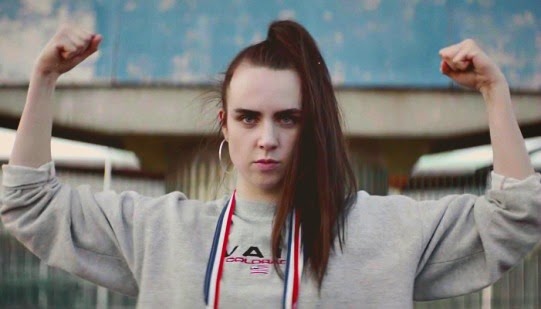 And at the indoor track...

The Chemical Brothers 'Setting Sun' video was also filmed in Crystal Palace park, but on the terraces at the top of the park rather than by the sports stadium.
Posted by Unknown at 13:54