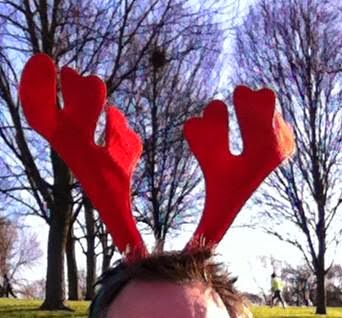 So Christmas and New Year is well and truly over and for the (barely) gainfully employed it's back to work and marathon training. For the second year running I started Christmas Day at Hilly Fields parkrun. I was slow with a sore ankle but was the first finishing reindeer, so I will take it. It was windy and I had to hold on tight to my antlers on the faster downhill sections of the course. I rarely get lapped at Hilly Fields but on this occasion I was just coming to the top of the hill that marks the end of the second lap when I heard thunderous steps coming up behind me- national Inter Counties Fell Running Champion and GB Mountain Runner Shaun Dixon on his way to break the course record followed closely by Paul Martelletti, who ran for GB in the 100 km World Championships in Doha in August 2014.


Then there's New Year's Day, the only day in the year in which you can record two parkruns in one day (for the rest of the year all parkruns everywhere in England start at the same time, 9:00 am). I ran at Peckham Rye at 9:00 am, and then Hilly Fields at 10:00 am, while others went from Peckham to Dulwich Park or Southwark Park. Hilly Fields parkrun ended on a sombre note with a runner collapsing at the finish line and being taken to hospital in an ambulance apparently very seriously ill, but glad to say he seems to be recovering.

As with Christmas Day, there's been a steady growth in runners, at least judging by those South London parkruns that took place on New Years Day.

Another Christmas tradition amongst many athletics clubs is a paarlauf race. Paarlauf is German for 'pair running' but it can be run with larger teams. Essentially it's a relay race, with the difference being that it is entirely up to each team to decide how it covers the distance - there's no fixed leg. At Kent Athletic Club the pre-Christmas paarlauf at Ladywell track consisted of 13 teams of 3 running 16 laps (6400m) between them. My team ran in consecutive 200m sprints, but as we came last that might not have been the best tactic. Others were taking elaborate short cuts across the middle of the track to enable shorter legs or even having the stronger runners run longer distances. All good fun, though running 11 200m sprints with minimal recovery certainly took it out of me.

The final festive tradition must be the first cross country races of January, where many seasonal pristine presents of nice new running shoes are christened in the mud. Saw some lovely looking spikes before the start of the Surrey League at Streatham Common but they all looked much the same colour afterwards. 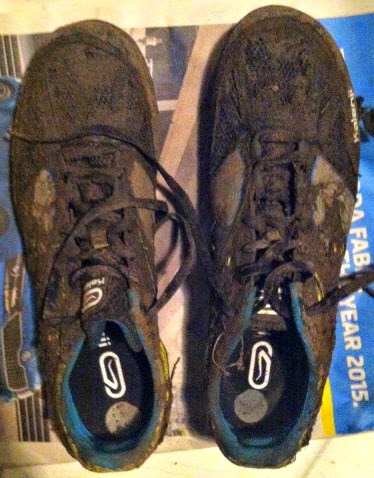 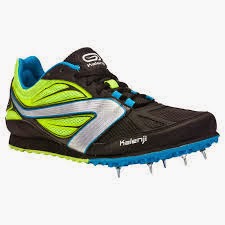