Last weekend (Saturday 7 February) saw the last of the four races in this season's 2XU Surrey Men's Cross Country League Division One, hosted by Ranelagh Harriers in Richmond Park. Kent A.C went into the match as a more or less dead cert to win the championship, having won all three previous races. And indeed they went on to hold on to the trophy for the third year in a row, even though on the day they were pushed into second place by Thames Hare and Hounds.

The match was an uncanny rerun of the same fixture last year, also won by Thames H&H at Richmond Park, with Kent A.C. second but winning the League. And in both 2014 and 2015 the individual race was won by Paskar Owor of Belgrave Harriers with a 17 second gap between him and second finisher John Gilbert (Kent AC). The first five of 174 finishers last week were:
1. Paskar Owor (Belgrave Harriers)
2. John Gilbert (Kent AC)
3. Chris Greenwood (Kent AC)
4. Kevin Quinn (South London Harriers)
5. Ryan Evans (South London Harriers)

The course was over two laps, 5.65 miles in total, at the Petersham end of Richmond Park. After some of the muddy hills of previous fixtures, it was a bit of a breeze with a nice long descent to start with along a track known as the Queen's Ride. If anything I could have done without spikes as parts of the course were quite gravelly underfoot.

I ran for Kent, although I didn't come close to scoring in my three outings in the League it was great to be on the fringes of a winning team. As well as winning the senior men's League, the club's Alex Yee won all four races in the under-17s races and will be one to watch when he moves up to run in senior competitions next year. The women's team also had a good start in their first season in the League, with some strong performances.

After tea and cake in the Ranelagh Harriers clubhouse in Petersham, we retired to the White Cross, a fine riverside pub in Richmond, to celebrate.

Ranelagh Harriers did a good job of organising the race last week with enough marshals to make sure there was no repeat of this incident from 1947: 'Three members of the Paris University team took a wrong turning in a six-mile cross country race with London University in Richmond Park'. They were found two hours later having run eleven and a half miles! 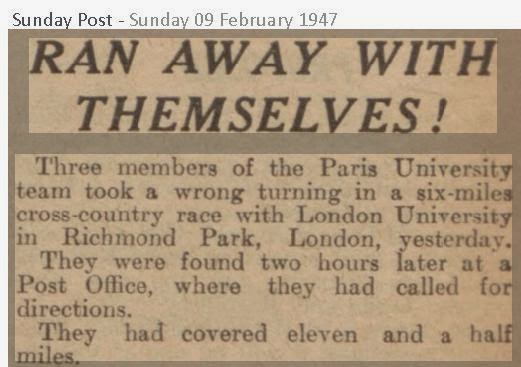