I've had a couple of good runs at East London's Victoria Park in the past two weeks, one of London's great running parks.

Last night Chris McDougall was in town. The author of the influential 'Born to Run' is promoting his new book, 'Natural Born Heroes', and 'Like the Wind' magazine with Run Dem Crew arranged for a group of us to go for a run/chat with him. We met up at the Proud Archivist canalside bar in Haggerston, and ran along the Regents Canal followed by a circuit of the park.

We stopped for a photo in one of these two alcoves - originally part of the old London Bridge, they were moved to the park in 1860 after the bridge was demolished (there's also one at Guys Hospital). 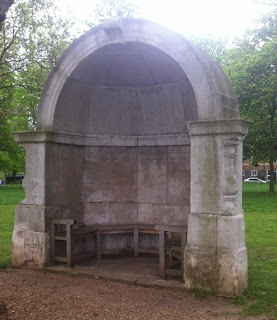 After the run we headed back to the Proud Archivist for food, drink and Chris in conversation with Run Dem Crew's Charlie Dark and Simon Freeman, editor of Like the Wind (new issue just out by the way).  Looking forward to reading Chris's new book, its starting point is how anti-Nazi resistance fighters in Second World War Crete managed to survive while hiding out, leading on to discussion of human agility, parkour, fat burning running and much more besides.

Chris commented how much he had enjoyed running along the canal and into the park, where despite having to constantly dodge cyclists, walkers and bargees, runners get to see a never ending panorama of humanity.

There always seems to be runners heading up and down the canal paths and into the park. Even though I live on the other side of London, I count myself  amongst them. Earlier in the year in London Marathon training a group of us regularly headed from South London, through the Greenwich foot tunnel, across the Isle of Dogs and up the canal path, pausing in Victoria Park before running home.

And of course the park is home to a lively running club - Victoria Park Harriers and Tower Hamlets Athletics Club (VPHTH). It was thanks to them that I found myself racing at the park a couple of weeks ago.

The Assembly League in Victoria Park

The second of this year's Assembly League races was held in Victoria Park on Thursday 7th May, with 314 runners from 13 clubs completing the 3.5 mile course (see here for some Assembly League history/background).

In the team competition, first three teams were as follows:

It was General Election night, so perhaps appropriate to be in this historic park where Chartist and Suffragettes once assembled. Clashes at a Chartist meeting in 1848 led to claims in the House of Commons that 'certain outrages were committed on peaceable, loyal, and unoffending individuals' by the police. Suffragette protests included a 'Women's May Day' demonstration in 1913, which saw Sylvia Pankhurst arrested in Victoria Park. The Park was also the scene of the famous 1978 Rock Against Racism 'Carnival Against the Nazis' with The Clash and Steel Pulse - not to mention the scene of me dancing under a disco ball and watching Goldfrapp and Flaming Lips at the Lovebox festival thirty years later.

But for the duration of the race at least, politics and indeed  music was off the agenda. We met up at the Victoria Park Harriers clubhouse in the park, near to the start. The 3.5 mile course consisted of a short 1 mile loop, followed by 2.5 mile 'figure-of-8'. Obviously that did make the second lap feel a bit on the long side! But we all got there eventually... and back to the clubhouse and its well stocked bar. Next Assembly League race is at Battersea Park on June 4th. 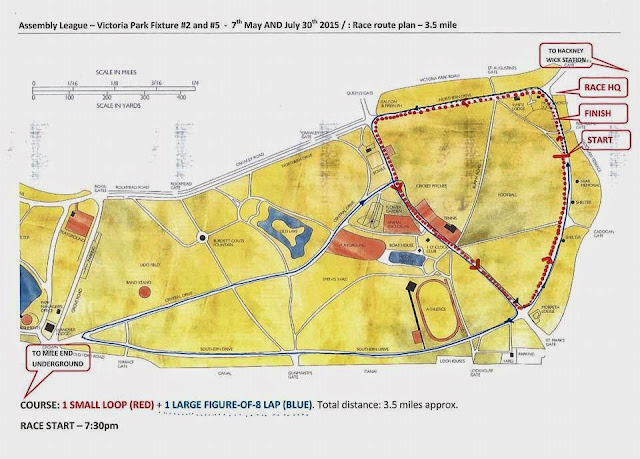 See previously: Staying out for the summer - start of 2015 Assembly League in Beckenham