Running down the mountain Jack Kerouac-style

The great Beat writer Jack Kerouac (1922-1969) was a college athlete, in fact he got a scholarship to Columbia University as a result of his prowess as an American Football running back.  A broken leg and arguments with his coach finished his sports career.
﻿
At his writing peak though he was no stranger to physical exercise, and his novels 'The Dharma Bums' (1958) and 'Desolation Angels' (1965) both feature fictionalised accounts of his real experiences in the mountains of California and Washington state.

A central episode in 'The Dharma Bums' is a climb of the Matterhorn Peak in the Sierra Nevada Kerouac made with the poet/Buddhist/anarchist Gary Snyder (named 'Japhy Ryder' in the novel). At one point on the way up, Kerouac despairs:

'I nudged myself closer to the ledge and closed my eyes and thought 'Oh what a life this is, why do we have to be born in the first place, and only so we can have our poor gentle flesh laid out to such impossible horrors as huge mountains and rock and empty space,' and with horror I remembered the famous Zen saying, 'When you get to the top of a mountain, keep climbing.' The saying made my hair stand on end'.

However the way back down is a lot more fun:

'Then suddenly everything was just like jazz: it happened in one insane second or so: I looked up and saw Japhy running down the mountain in huge twenty-foot leaps, running, leaping, landing with a great drive of his booted heels, bouncing five feet or so, running, then taking another long crazy yelling yodelaying sail down the sides of the world and in that flash I realized it's impossible to fall off mountains you fool and with a yodel of my own I suddenly got up and began running down the mountain after him doing exactly the same huge leaps, the same fantastic runs and jumps, and in the space of about five minutes I'd guess Japhy Ryder and I (in my sneakers, driving the heels of my sneakers right into sand, rock, boulders, I didn't care any more I was so anxious to get down out of there) came leaping and yelling like mountain goats or I'd say like Chinese lunatics of a thousand years ago, enough to raise the hair on the head of the meditating Morley by the lake, who said he looked up and saw us flying down and couldn't believe it. In fact with one of my greatest leaps and loudest screams of joy I came flying right down to the edge of the lake and dug my sneakered heels into the mud and just fell sitting there, glad. Japhy was already taking his shoes off and pouring sand and pebbles out. It was great. I took off my sneakers and poured out a couple of buckets of lava dust and said "Ah Japhy you taught me the final lesson of them all, you can't fall off a mountain"'.

In 1956, Kerouac lived alone for 63 days on Desolation Peak in the North Cascade Mountains of Washington state, working as a fire look out. In 'Desolation Angels' he again describes running down, this time with the added incentive that he has to catch a boat at the bottom and is anxious to return to the 'sweet cities below' with their 'burlesque shows, cigars and wines and papers in a room, fogs, ferries, bacon and eggs and toast in the morning'. Although few of us have had to run quite like he describes, the struggle of keeping going through the pain will resonate with many of us I am sure:

'The best way to come down a mountain is like running, swing your arms free and fall as you come, your feet will hold you up for the rest – but O I had no feet because no shoes, I was “barefooted” (as the saying goes) and far from stomping down on big trail-singin steps as I bash along tra la tra la I could hardly even mincingly place them the soles were so thin and the rocks so sudden some of them with a sharp bruise – A John Bunyan morning, it was all I could do to keep my mind on other things – I tried to sing, think, daydream, do as I did by the desolation stove – but Karma your trail is laid out for you – Could have no more escaped that morning of bruised torn feet and burning-ache thighs (and eventual searing blisters like needles) and the gasping sweats, the attack of insects, than I can escape and than you can escape being eternally around to go through the emptiness of form (including the emptiness of form of your complaining personality) – I had to do it, not rest, my only concern was keeping the boat...

...So I up I get and lunge along with pack, thumbed, and wince on ankled pains and turn and turn the trail faster and faster under my growing trot and pretty soon I’m running, bent, like a Chinese woman with a pack of faggots on her neck, jingle jingle drumming and pumping stiff knees thru rock underbrush and around corners, sometimes I crash off the trail and bellow back on’t, somehow, never lose, the way was made to be followed...  Sometimes I fall, on haunches, slipt, the pack is my back bumper... it’s a dance, dance from rock to rock, hurt to hurt, wince down the mountain...

... The trail, last halfmile, is worse than above, the rocks, big, small, twisted ravines for your feet - Now I begin sobbing for myself, cursing of course - 'It never ends!' is my big complaint... 'But this is only a Samsara-World-of-Suffering trail, subject to time and space, therefore must end, but my God it will never end!' and I come running and thwapping finally no more - For the first time I fall exhausted without planning.. I push myself up and try on - Every step wont do, it wont work, that my thighs hold it up's'mystery to me - plah -

Finally I'm loading my step on ahead of me, like placing topheavy things on a platform with outstretched arms, the kind of strain you cant keep up - other than the bare feet (now battered with torn skin and blisters and blood) I could just plow and push down the hill, like a falling drunk almost falling never quite falling and if so would it hurt as much as my feet? - nu - gotta push and place each up-keen and down with the barbfoot of Blakean Perfidy with worms and howlings everywhere - dust - I fall on my knees. Rest that way awhile and go on.... the wild flowers don't interest me no more - 'I can't make it' is my only thought as I keep going, which thought is like phosphorescent negative red glow imprinting the film of my brain 'Gotta make it' -

... I rounded the final little shelf-trail to the boat - This I plodded and waved with a smile, letting the feet go by, blister in left shoe that I thought was a sharp pebble ground into my skin - In all the excitement, dont realize I am back in the world at last'.

This was no doubt not Kerouac's most pleasurable journey, but elsewhere in 'The Dharma Bums' he listed running as one of the elements of the good life - and who could disagree?:


'Happy. Just in my swim shorts, barefooted, wild-haired, in the red fire dark, singing, swigging wine, spitting, jumping, running — that's the way to live. All alone and free in the soft sands of the beach by the sigh of the sea out there'. 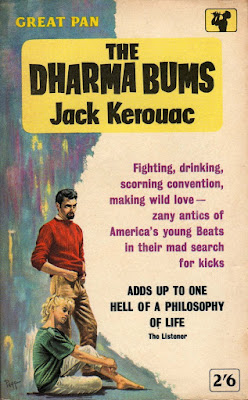 'These forms who hasten by' - runners on the Pilgrims Way, 1920s
'You just had to run' - Karl Ove Knausgaard
Morrissey - List of the Lost
Burns Night Running Thoughts
Running in the Railway Children
A Midsummer Night's Running
Running to Paradise - W B Yeats
The Sky of a Saturday Morning - John Updike
The Road is a Strange Country - Rebecca Solnit
The Runner - W H Auden
Once a Runner - John L Parker jr
Louisa May Alcott - 'A Joy to Run'