The third match in this season's Surrey League men's cross country took place at Mitcham Common on 16 January 2016, with 196 runners from the nine Division One clubs. It was another victory for Kent AC (my club) - now top of the league having won it for the last three seasons-  with Hercules Wimbledon in 2nd and South London Harriers 3rd on the day. Kent AC's John Gilbert won the race, with a six second lead over Belgrave Harriers' Paskar Owor, followed by Chris Greenwood (Kent AC).

The course was three laps (5.3 miles) of the eastern part of the Common - once upon a time the home of a number of football pitches, it was landscaped in the 1980s with the creation of some artificial hills which certainly make for a more interesting cross country course. None of the hills was particularly taxing, but they did have a cumulative effect. The ground still had the odd patch of ice before the race, but got wet and muddy in places as it thawed. As a guide to the Common puts it 'Around the foot of the hills, parcels of wetland have survived' and our feet certainly found at least one of those parcels.

Changing facilities were at the Mill House Ecology Centre, where race hosts Clapham Chasers put on one of the finest post-race spread of cakes I have come across- Kent AC may have won the race, but the Chasers definitely won the cakes.

There's plenty of running history in this area. The following report describes an epic Boxing Day Hare and Hounds race in December 1868 organised by Surrey Athletic Club. The run, which started at the Greyhound in Streatham, covered around 16 miles including Tooting Common, Wandsworth Common, Wimbledon, Thornton Heath, 'round Mithcham Common to Beddington' and then back for  the 'plain but substantial fare placed before them by the landlord of the Greyhound Hotel'. 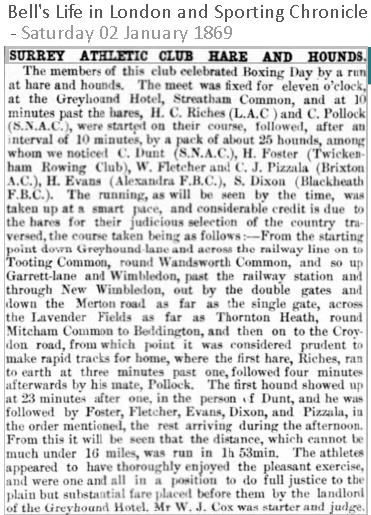