Back to Parliament Hill: South of England Cross Country Championships 2016 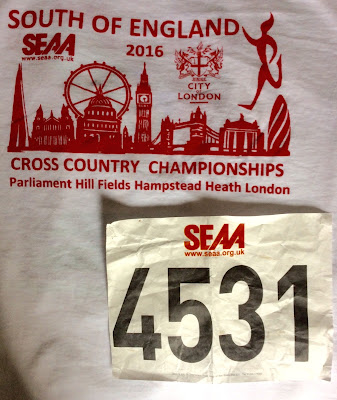 The 2016 South of England Cross Country Championships took place at Parliament Hill on Hampstead Heath on Saturday 30th January, with 3099 runners finishing 10 races for males and females of various ages.

Headlines in terms of the results were that Jonathan Hay (Aldershot) won the men's senior title, ahead of Chris Zablocki (Chichester) and Thames Valley Harriers' Antonio Silva. Highgate Harriers - for whom Hampstead Heath is home turf - won the team competition, with Serpentine Running Club in 2nd  place and Bedford & County AC 3rd.

Good performances too from Kent AC (my club), with the men's senior team in 5th place  (out of 70) and the women's team coming 9th in our first ever year of fielding a full women's team. We also had success in the junior races with Ollie Bright coming 7th in the U13 boys and Isabel Bradley in  30th place in the Under-20s women (full results at South of England Athletics Association).

So at the front of the races there were some top athletes, but for the rest of us it was the challenge of doing our best over one of the most challenging cross country courses, in one the sport's spiritual homes.

I ran in the Nationals here last year, but found the Southerns tougher as it was over three laps instead of two - official distance was 15k (9.3 miles). Although my Garmin made it slightly less, in effort level terms it was up there with a half marathon. I love watching the races heading up from the start by Parliament Hill Lido with the city skyline behind them, but the famous long uphill start isn't as daunting as it seems when you're running. The adrenalin, the crowd and and the tightly packed field carry you up to the top.

It's as the course heads downhill to the right that the going really starts to get tough with a long section of heavy, ankle deep mud that continues as the route turns and heads up the slope. There's another energy-draining section about half way round the lap, deep in the woods wading through slurry and leading straight onto a steep slippery hill. After that the rest of the lap is on relatively solid ground, albeit with some sticky patches, and rejoins the starting hill to begin  the next lap towards the top of the slope

On the third and final lap there's a long descent down to the finishing stretch, right by Parliament Hill Fields Athletics Track. Then you get to go to the pub... in our case The Assembly House in Kentish Town, not sure if it got drunk dry as it did last year after the Nationals, but they'd certainly run out of some beers by the time I left (and that was quite early on).

The indefatigable Mark Hookway from Tonbirdge AC has posted videos of all ten races here. Cruelly the men's senior footage starts with the most difficult section - hell in the woods (actually this is the first lap, it got a lot worse as the mud became more churned up). My only thought at this point was just keep running, however slowly...

There's a whole lot of history, folklore and legends associated with Parliament Hill. Is the mound to the north of the hill really ‘Boedicea’s Grave’? (No). Did Highwayman Dick Turpin hang out in the area? (Possibly). Is the Hill named after the Parliamentary/anti-Royalist forces who occupied it during the English Civil War? (probably).

But in athletics terms, the Hill has its own legends - Brendan Foster winning the  English National Cross Country Championships there in 1977, Mo Farah winning the Nationals Junior Men's race in 2003, and many more.

Another legend was present on Saturday and said a few words - David Bedford, who won the National XC at Parliament Hill in 1973, as well as the London Cross Country champs there several times. There's British Movietone footage of him winning the London XC champs in 1973, crossing the line with his pet labrador, Snoopy:

... and also of another Bedford victory in the same competition, I believe from 1974: