This Sunday 3rd September I will be running in the Ladywell 10000m, my first time running this distance on the track on what should be a great day out at Lewisham's Ladywell Arena.

This is the biggest event of the year for my club, Kent AC, who are based at the track. There will be six races, the first starting at 3 pm and the last at 7:30 pm, with some top club runners at the faster end chasing down times of around 30 minutes. 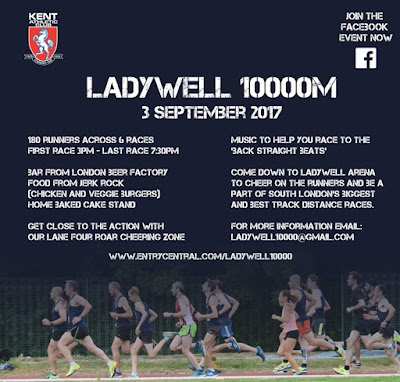 Highgate Harriers' Night of 10000m PBs has shown that it is possible to make watching long distance running a great day out. Seeing people giving it their all as the races unfold gradually over 25 laps, while hanging out having a drink, is a great way to spend a day. Ladywell might not be on quite the same scale as Highgate, but a lot of effort has gone in to making this a memorable event. There will be food and drink from the West Norwood based London Beer Company, and as at Highgate people will be encouraged to get close to the action to cheer on the runners.


The Ladywell 10000m represents another step forward in the revival of grass roots running in London and beyond. Following a period when some of the events organised by national bodies had become lacklustre and routine, events like Night of 10000m PBs (initiated by Highgate's Ben Pochee), Orion Harriers' Fast Friday, the Soar mile at Battersea, Hercules Wimbledon 5k night, not to mention British Milers Club events, are putting some energy and excitement back into track racing. Arguably this is a perfect time for this revival, with a new wave of people coming into club running via parkrun and looking to take the next steps on to faster times and competitive racing.

The track is behind Lewisham Hospital, come along and check it out, it's free admission. If you are a runner in SE London and looking to improve further, you might want to see the local club in action and see if it's for you- we cater for everyone from parkrun improvers to Olympians.

Check out this great short film of the Ladywell Arena, posted on twitter by Olympic 400m runner Conrad Williams, who belongs to the club: