The road is a strange country - Rebecca Solnit

'In motion it seems that time is not slipping away from us but we are pursuing it, measuring its passage in the rhythm of the road... Perhaps if we didn’t imagine life as a journey rather than some other metamorphosis—the growth of a tree, for example—roads would not seem like destiny itself, but we do and they do. To move along the road is to encounter all the loose elements, the dangers and possibilities, to slip out of a settled destiny in pursuit of stranger fates. The road is a promise as simple as what lies ahead, never failed and never delivered, and the road is a strange country itself, longer than all the continents and narrow as a house, with its own citizens, its own rules, a place where the solid and settled become fluid'.

'Roads are a no-man’s-land, a leveling ground, the place where one is no longer one thing and not yet another'

'Being in motion wakes the body up. In repose one is nothing but a surface face of potential sensation, only the surface, the skin, is awake. Exertion and pain make the rest tangible— otherwise bones and muscles and organs would be little but articles of faith beneath the visible and sensible surface of skin, and so one’s own interior anatomy may be among the things explored in the course of a journey’s exertions' 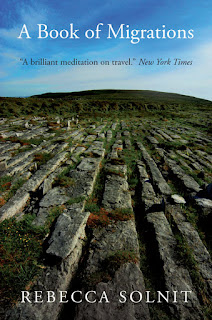 (Rebecca Solnit, A Book of Migrations, 1997 -  reflections on her travels across Ireland, including some timely thoughts on dubious notions of blood, soil and identity, and on the joys and otherwise of journeying. No running in the book, but lots of walking, and I thought her notion of the road as another country is something felt by runners, as is the experience  of getting to know our anatomy through motion and pain)
Posted by Neil Gordon-Orr at 10:25