The Running Sky - of birds, books & runners in rotation

In Nottingham's Wollaton Park after this year's English National Cross Country Championships, there was a moment as the sun was going down when a large number of crows (yes I know the collective noun is 'A Murder') began circling above the hill where shortly before thousands of runners had circled on the last lap of their races. It felt like they were echoing the cross country race itself, though presumably they do it all year round, the park being home to 'a large corvid roost made up of rook, jackdaw, and carrion crow' (wikipedia)

It reminded me of a passage I'd read earlier that  day in Tim Dee's The Running Sky: A Birdwatching Life, describing not crows but a similar flight of seabirds:

'To see vast numbers of birds in silent movement is beautifully strange. In this crowd of so many moving things, the eye leaps constantly from individuals to the whole event. These are not flocks but countless single birds caught in a storm of life. Individuals fly fast but the ensemble seems to be moving at dream speed. The rush of the single bird somehow slows in the crowd. I cannot focus for long on a puffin with its hurrying wings in the wheeling cloud; instead I see a tumbleweed of birds rolling out from their grassed lawns and terraces over a gulf of air, a slow motion collective rotation'.

I’d been reading this book on the journey up to Nottingham – with a title like the Running Sky it got some curious looks on a train full of runners. But of course it is not a running book but a reflection on the author's lifetime fascination with birds. 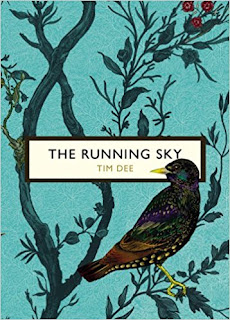 While I have never been a fully fledged adult birdwatcher, I was and am interested in them as I have mentioned before. At primary school an enthusiastic teacher enrolled me in the Royal Society for the Protection of Birds' Young Ornithologists Club, something I recalled recently when I went to a bird themed art exhibition at the old library building on Walworth Road, near the Elephant and Castle (the building, which housed the Newington library and Cuming Museum has been closed following a fire, hopefully it will fully reopen permanently in the not too distant future).

Natural Selection combines the scientific perspective of Peter Holden, sometime national organiser of the Young Ornithologists Club, and the work of his artist son Andy Holden who is as interested in the aesthetic properties of birds, their nests and indeed the illicitly curated hordes assembled by illegal egg collectors.  Without undue anthropomorphism he wonders whether in some circumstances individual birds make choices about their use and display of materials in a way that can be regarded as akin to artistic activity. 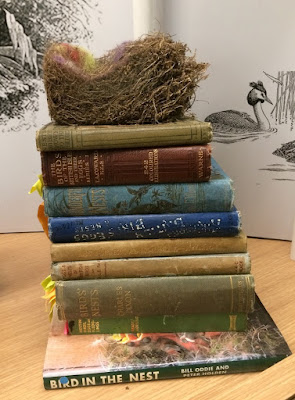 The display includes a case of birds nests arranged on piles of books - the importance of which cannot be overestimated. A recent thread on Twitter started by nature writer Robert Macfarlane asked people to share which bird, animal and plant books they had learnt from as children. It reminded me of how much those of us with childhoods before the Internet or even widespread colour TV relied upon books like the Observer's Book of Birds and the various Ladybird bird books among others. In fact it was in some ways the colourful plenitude of these lavishly illustrated volumes that made bird life seem so appealing, even if most of us would only get to see a handful of the species in the feather and flesh. I was particularly taken by a series of early 1970s 'Hamlyn All Colour Paperbacks' illustrated by Ken Lilly, I still have my copies of Seabirds and Birds of Prey, though along the way have lost my Tropical Birds. 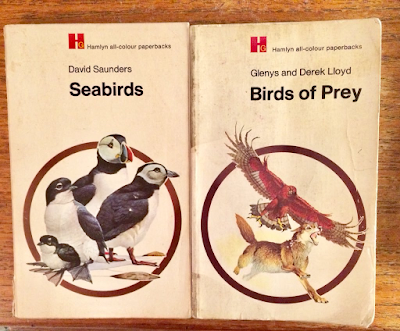 In the wild, birds are rarely to be viewed in fine detail up close and still, but as we catch glimpses we fill in the gaps in our visual perception with the mental images we have stored from drawings and photographs. But no bird book can really capture the social phenomenon of flocks of birds in 'slow motion collective rotation', like runners racing around a field. And what does the birds eye make of the crowd of humans down below as they jostle for position, each dwelling in their individual exertions and largely oblivious to the pattern they create as they weave in and out of each other, moving together and separately at the same time.

(The Running Sky takes its title from a Philip Larkin poem, which rather gloomily asserts the pointlessness of dreaming of flying or running as loss and loneliness are all that await...

'If hands could free you, heart,
Where would you fly?
Far, beyond every part
Of earth this running sky
Makes desolate? Would you cross
City and hill and sea,
If hands could set you free?

I would not lift the latch;
For I could run
Through fields, pit-valleys, catch
All beauty under the sun—

Still end in loss:
I should find no bent arm, no bed
To rest my head'.

On a similar theme to ‘Natural Selection’ here's the wonderful Band of Holy Joy with the Observer's Book of Birds Eggs:
'it was the first book I ever owned, the Observer's book of birds eggs, fully illustrated and described in natural colours, and yay it was mine. I devoured every page from the hooded crow to the ptarmigan' (incidentally lead singer Johny Brown ran the Royal Parks Half last month after doing the Great North Run last year).