In between watching Mo Farah and Tirunesh Dibaba  win their respective 10,000m events at the World Championships in Moscow, I went for a not quite as quick 10k myself in Richmond Park (where Farah once regularly trained). The event on Sunday 11th August was organised by Nice Work for Capital Runners.

315 runners took part, a mixed ability field with finishing times ranging from 34:52 to 1:33:07. (results here). Winners were Adam Kirk-Smith for the men's and Deirdre McDermot (Tonbridge AC) for the women's race, the former a couple of minutes ahead of the rest despite having to rerun the final section after a misunderstanding about the route at the end.

Richmond Park is a huge expanse, it certainly feels like you are deep in the countryside rather than in a London park, albeit one in the leafy South Western suburbs.  At 2500 acres it is the largest enclosed space in the London area.

And of course it has what few other parks in London have - more than 600 red and fallow deer. On the first lap on Sunday I spent some time gazing at a herd of red deer across the road from the running track, not so much on the second lap when I was more staring at the ground through gritted teeth.

Until the 17th century most of  what is now the Royal Park was common land. Then King Charles I put a wall around it to the dismay of those who had previously used it for grazing animals and gathering firewood: 'A resort of royalty and nobility, attempts were made to keep out the commoners, to lock the gates, to provide the favoured few with keys or tickets of entry' (E.P Thompson, Whigs and Hunters, 1975). In the 18th century there was a bitter fight to regain public access to Richmond Park after further restrictions had been imposed. One of the leaders in that struggle, local brewer John Lewis, is commemorated on a plaque at Sheen Gate, near to where the race started at the weekend. So thanks to him and all the others who made it possible for us commoners to run around the park! 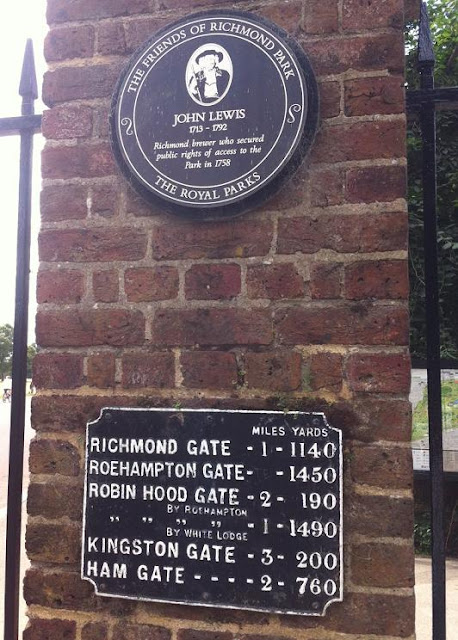 The route: the run on Sunday was two laps of a 5k course in the north of the park, starting out near Sheen Gate, with a long stretch along Sawyers Hill. With numerous roads, paths and trails crossing the park, any number of other routes are possible.

Terrain: on this route a mixture of gravel paths and grass tracks.

Hazards: the deer aren't threatening unless you get too close to a stag during the rutting season, or come between a mother and her baby deer. But a deer did once steal my sandwich while picnicking in the park! An additional hazard for this particular race was the queue for the public toilets at the gate just before the race - you might want to go somewhere else or get there early.

Getting there: If you are not driving or cycling, Richmond rail station is about 1.5 miles away (details of walk to park here)

Opening times: opens  7:00 am to 9:30 pm in summer, shorter hours in the winter (check website for details)

Post-run refreshments: within the park there is a tea room at Pembroke Lodge, lots of places to eat and drink in East Sheen if you are at that end of the park.

The next Capital Runners 10k race in the Richmond Park Series is on 8th September, followed by 27 October and 24th November 2013. Richmond Parkrun follow a very similar 5k course there every Saturday at 9 am, though they start near Bishops Gate. 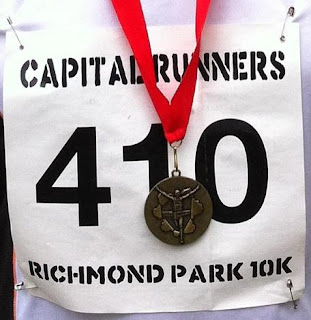